The Youngstown State University Chem-E-Car team will continue its final preparations for the upcoming regional event at Purdue University this weekend.

The process to create, develop and modify the car poses difficult challenges, according to team members.

The team was first created in 2014. Member Bridger Kowalczyk said he has been with them ever since they “started with absolutely nothing.”

“After working on a very small budget, just making ends meet, we were able to do well at the Illinois conference a few years back, and we got second place there,” he said. “From there, it kind of started the whole program, which got more students interested.”

“It’s Chem-E-Car tradition, in that we’re always here the entire night beforehand, trying to figure out any problems with the car,” Haldiman said. “Then, we put it all together, and make sure everything works.”

Kowalczyk said almost everything must be perfect for the car to run, and for it to run successfully.

“Generally, we’ll finish the year off, and we’ll say next year, we’re going to look into this concept, something very off the wall and unique … something possibly really good, but we don’t know unless we try it,” Kowalczyk said. “This whole time, we were working on something called a Vanadium Redox Flow Battery, and it was a major pain in the butt and it didn’t work, so we abandoned it and went back to a new, improved design of our old batteries.” 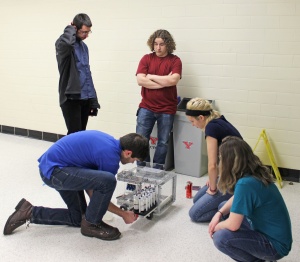 Kowalczyk said the body and circuitry of the car changed drastically during the process.

Despite the extensive developmental process, YSU’s team aims to create something unique, something never seen before, each year.

Haldiman said the team must change an aspect of the car each year, drastically.

In years past, the team used a 3-D printed car; furthermore, the stopping mechanism used on this year’s car is unique because it uses titration to stop it.

For the upcoming regional competition at Purdue University, the team members said they hope to make it to nationals for the second time.

In 2015, the team qualified for the national tournament in Salt Lake City, Utah. Had it not been for a small error last year, the team would be looking to make its second straight appearance at nationals this weekend.

Haldiman believed if the car’s laser hadn’t moved the inch it did, the team would have achieved victory.

“You can almost consider Chem-E-Car as the core concept behind the four years of engineering school,” Kibbler said. “You can incorporate anything you learned in class into this, if you want.”

“Chem-E-Car teaches you the basics … A lot of what happens is you walk through your major, you go through the motions in entry level classes and you don’t really know what’s going on,” Kowalczyk said. “For me, the team gave me a taste of understanding everything that’s coming up. It’s small scale, but everything branches out from there.”

For Kowalczyk, the team helps each member get recognized by the faculty, which allows them to develop better relationships.

Haldiman said the team helps with the understanding of simple and complex engineering concepts.

As for the competitions themselves, each team is required to move its car at least 15 to 30 meters, and the car must stop near the designated line. The car must also carry 100 to 500 milliliters of water. The distance and amount of water is unknown until right before the competition starts.

Kibler said the entirety of Saturday is spent with competition.

“We’re participating in Jeopardy for the first time,” Kibler said. “The way they have these conferences set up is they last for 10 days. The regional conference portion is one week, and that starts on Monday. The student conference goes from Friday to Sunday. It’s mostly networking events, informational talks, learning sessions, Chem-E-Car, career fairs … It’s a lot.”

During their history, the team traveled all over the country, where they ran into Minnesota Timberwolves forward Andrew Wiggins at a Minneapolis restaurant, and former Ohio State quarterback Cardale Jones at an airport in Chicago.