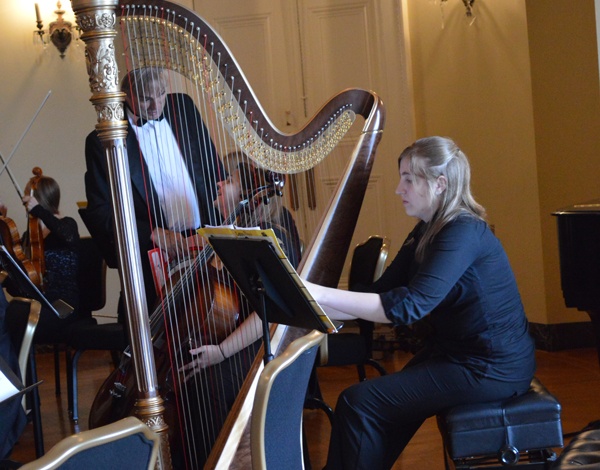 Students and staff of the Dana Chamber Orchestra have worked diligently to prepare a plethora of entertaining concerts that will run from September to December in the Stambaugh Auditorium.

The songs on Sunday were based off of the musical balance and chaos of nature. The pieces consisted of subtle, calming melodies followed by a shrill eccentricity that mimicked the natural state of the universe.

The orchestra played “Prelude a l’apres-midi d’un faune” by Claude Debussy, a selection that is inspired by a Ceridian forest god who is coming to terms with his loss of innocence. The song was followed by “Pavane Pour Une Infant Defunte” (Pavane for a Dead Princess) by Maurice Ravel, an orchestral piece that was originally written as a work for piano.

The night concluded with a performance of “Music for Strings, Percussion and Celesta” by Bela Bartok, which was broken down into four separate quadrants.

John Wilcox, the director and conductor of the Dana Chamber Orchestra, said that he has been waiting 35 years to perform the pieces like those from Sunday in the Christman Room of the auditorium.

“This is a great group of kids. … I didn’t think I had the horses to do it, but this year, I realized I finally had the strings to pull it off,” Wilcox says, “It felt good to do those pieces after all this time.”

Wilcox said that the students bring vigor and strong work ethic to the table when learning new music.

Spencer Reed, a senior piano player in the ensemble, said he feels like all the work the students put forth is worth the end result.

“I feel like the work helps us appreciate new music and broaden our horizons when it comes to new pieces,” Reed says, “it also gives us a bond through our passion.”

Zachary Weese, a junior violinist in the orchestra, said that Wilcox does a fantastic job at keeping the group together to create a full, complete sound.

“These pieces are hard to put together. It seems simple when you pull it apart, but making all the instruments balance in a group is what is difficult,” Weese said. “He has to know exactly what he is doing for this chaos to sound as beautiful as intended, and he does a great job at it.”