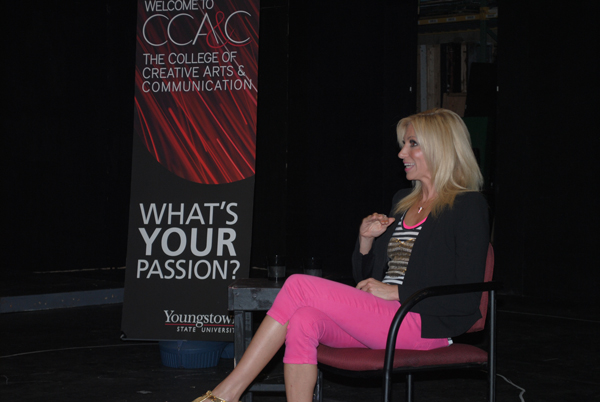 In 1987, after spending an incredible amount of time and effort, 17-year-old Debbie Gibson broke onto the music scene with her debut pop album “Out of the Blue.”
Spawning four singles that reached the Billboard Hot 100 Top 5, Gibson made it big. Little did she know at the time, her music career would only become more challenging.
“It doesn’t get any easier once you breakthrough,” Gibson said Monday at Youngstown State University. “It’s like being an Olympic athlete – but they get to retire when they’re 30.”
26 years later, Gibson is still working at her craft.
Having come a long way since her debut album, the “Only in My Dreams” singer will perform at the Covelli Centre on Sept. 25 and 26 as part of the touring musical “Cirque Musica.”
Inside Bliss Hall, she promoted her upcoming show, spoke to YSU students and answered their questions.
“I’ve tried to get out of the bubble lately and in touch with writing real things,” said Gibson, who wrote two songs for the musical. “Technique has saved me and given me longevity.”
Gibson gave plenty of advice to the students, drawing from her storied career.
She remains the youngest female to write, record and perform a No. 1 single with her 1988 hit “Foolish Beat.” She’s also starred on Broadway and on television, and released a total of nine albums.
“I try to surround myself with people that are brutally honest,” Gibson said. “It’s all about what you don’t force and not blocking any ideas.”
A major lesson Gibson learned over time, and stressed to the YSU students, was to not expect perfection.
“The voice is an imperfect thing. You don’t have to hit every note perfect,” she said. “I thought I was supposed to never complain when I was younger and trying to be perfect got me into some trouble.”
All students who attended Gibson’s session were given tickets to “Cirque Musica.”
In addition to the touring musical, Gibson said she is working on new solo music and hopes to release some of it soon.
“At this point, I feel like I don’t write songs anymore,” she said. “I channel them.”