Youngstown State University President Jim Tressel reflected on the challenges the university has faced in recent years and talked about his strategic plan in the State of the University Address, presented to hundreds of staff, faculty and students on Thursday in Kilcawley Center. 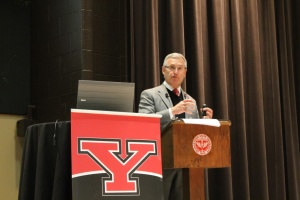 “It’s been an honor to serve,” Tressel said. “What you’ve accomplished in 31 months has been extraordinary; there’s been so much work being put in by so many people.”

When Tressel was appointed as president in 2014, Youngstown State University was dealing with a 17.5 percent enrollment decline, $10 million deficit in the budget and replacing four presidents in just six years.

Several staff and faculty positions were eliminated in 2014 to cut costs, which has required everyone to “do more with less people”, Tressel said. The YSU Foundation has also been handling the university’s expenditures and fundraising.

While the financial situation is improving, the university is still threatened by state-funding cuts, unfunded mandates and tuition freezes. In addition to these challenges, Tressel said the university is working towards solving problems presented in the campus climate survey last fall.

The results of the campus climate survey, administered by the Chronicle of Higher Education, suggested that faculty and staff were unsatisfied because of the lack of communication and shared governance at the university.

“Ultimately it comes down to individual responsibility,” he said. “I’ve got to do a better job of listening and sharing information.”

Tressel said a town hall meeting will be implemented bi-weekly in which deans of each college will meet with senior administrators and voice their ideas and concerns. YSU provost Martin Abraham said shared governance and communication are two sides of the same coin, so having a town hall discussion would improve both concepts.

“It’s an Exciting Time to be a Penguin”

There have been many academic achievements over the past year, Tressel said. YSU had one Rhodes scholar and two Goldwater scholars in the past year — Ohio State University is the only other college in Ohio to have that combination.

In addition to those academic achievements, Tressel said the Honors College has “exploded”, increasing from 300 honors students to over 700 in the past year. Another 179 application have been submitted for this semester.

With the Moot Court going to nationals in Gulfport, Florida and the YSU football team going to the national championship in Frisco, Texas, Tressel said it’s an “exciting time to be a Penguin”.

There are 32 counties within an hour driving span of YSU, Tressel said, which presents tremendous  job and internship opportunities for YSU students in Ohio, western Pennsylvania and West Virginia. There are two million jobs in this range, and there are 34 Fortune 1000 companies headquartered in the area.

In the future, the success students find after college might be tied to the funding the university receives from the state, he said.

“My prediction is, we are going to have to prove that our placement of students in a major is at a certain level,” he said, “I’m predicting that is going to affect the funding as we go.”