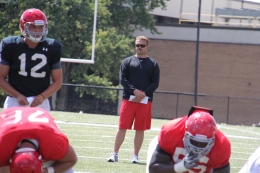 Head football coach Eric Wolford looks on as the Penguins practice at Stambaugh Stadium. Wolford has high expectations for his team as it heads into the 2012 season. Photo by Dustin Livesay/The Jambar.

Head football coach Eric Wolford is familiar with the saying, “Some things aren’t meant to be.”

The Penguins entered last year’s season finale in a win-and-make-the-playoffs scenario. Leading Missouri State University, 34-24, in the fourth quarter, the Penguins squandered the lead — and their playoff hopes — when the Bears rallied for a 37-34 victory.

“Things didn’t work out, and it wasn’t meant to be,” Wolford said. “We’re taking the approach that we’re not going to let it happen again.” The devastating loss, Wolford said, has motivated the 2012 Penguins.

“I think it’s made us a lot more hungry,” he said. “We’ve worked a lot harder in the offseason. We’re a hungry football team.”

Along the same lines, quarterback Kurt Hess said, “We’re definitely hungry, and we realize our potential.”

Apparently, the critics have noticed this potential as well. Youngstown State University is ranked 18th nationally in the 2012 preseason Football Championship Subdivision coaches poll and 13th in the Sports Network preseason poll. In addition, Phil Steele magazine, an authority on FCS football, ranked the Penguins fourth in their national top 25.

However, Wolford said he wants to make sure his team doesn’t get caught up in the hype.

“Really, I view those things as distractions,” he said. “I view it as a bunch of noise that, if you allow it, it will affect your focus at the task at hand.”

The task at hand, Wolford said, is to get better every day and take the season one game at a time. But the big-picture task for the Penguins is making the playoffs — and beyond.

“That’s always the case here,” he said. “The standard has been set, and we expect to [make the playoffs]. That’s why you come here.”

In his third season at YSU, Wolford has reworked almost the entire roster with his own recruits. Now, the Penguins’ inherited motto is, “No excuses.” “For the first time since I’ve been here, we’ve got all the pieces in place,” Wolford said.

Teven Williams is on the All-MVFC list of honorable mentions.

“That’s good. It’s a compliment to those players and our coaching staff,” Wolford said of the accolades. “But I know they’ll trade any individual award for a national championship.”

In another new tactic this season, Wolford has challenged his players to put forth “championship effort” each day at practice.

“Championship effort means we just come out here and do the hard things, push through it when we’re tired,” said defensive tackle Aronde Stanton. “It’s just about having enthusiasm all the time and, ultimately, that should get us to our goal.”

The Penguins’ journey begins at 6 p.m. Saturday when they visit Heinz Field to play the University of Pittsburgh.

“As long as we continue to get better, we should be good,” Stanton said. “I’m looking forward to the start of the season.”

While Wolford admitted his expectation of making the playoffs, he wouldn’t commit to championship expectations — or at least not directly.

“We want to win every game we take the field,” Wolford said. “It’s not hard to do the math there.”