Hispanic Heritage Month kicked off with its opening ceremony in the Mahoning County Courthouse on Sept. 14, recognizing individuals in the Youngstown area who come from Hispanic backgrounds. 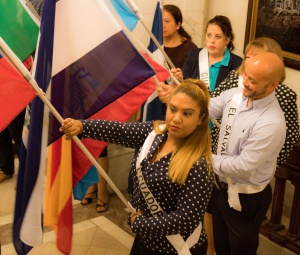 Montaldo said she was thankful for the opportunity, recalling only a few years prior when she became a United States citizen.

Montaldo was born in Chile to a diplomat father, forcing her to live in different countries while growing up. She studied abroad for one year in the U.S. after high school, where she moved in with a family in New Castle, Pennsylvania.

“One of my classmate’s family noticed [I was homesick] and invited me to dinner, and with their best effort to give me a little taste of home, they invited me to Taco Bell,” Montaldo said. “I realized right then that there was a misconception about Spanish-speaking countries being all the same.”

She moved back to the U.S. in 2001 to earn her master’s degree and pursue a career in higher education. She said her goal in the classroom is to ensure her students are understanding and tolerant of diversity.

“By preparing our students through diversity, they can be more culturally and emotionally intelligent,” Montaldo said. “Simply put, they would be ready for the real world.”

According to Montaldo, more than 1,000 students in Youngstown City Schools are identified as Hispanics. She said this growing population mirrors the rest of the country.

A recurring topic at the ceremony was President Donald Trump’s rescinding the Deferred Action for Childhood Arrivals program, which could leave the fate of Dreamers up in the air after six months. John McNally, mayor of Youngstown, addressed this issue during his speech.

“It is indeed unfortunate that President Trump has backtracked on his promise before and after his presidential campaign that these young Dreamers had nothing to worry about from this administration,” McNally said. “I… stand with the Dreamers, standing in direct opposition to President Trump’s decision.”

Cat Cooper, president of the YSU Latino Student Organization, said one of the greatest benefits to the month is that people learn about their own heritage as well as share it with others.

“In America, we only have one view. We only see United States and we’re so accustomed to the cultures and traditions of our country,” Cooper said. “In order to help students become more globally competitive, in order to promote diversity, we put on these events to help them showcase [the Hispanic culture].”

The Youngstown Latino Student Organization partners with the YSU Hispanic Heritage Committee and the Office of Student Diversity Programs to host events and activities throughout the month.

“The biggest issue that we’re having is student involvement and student participation,” Cooper said. “I hope more students will come out and experience that great diversity that we have at the university.”