The way people celebrate Easter may vary as they age. Depending on their traditions when they were young versus what they do now, the holiday celebrations are satisfied every year.

Linda Wittenauer, who works for Chartwells Dining at Youngstown State University, said to celebrate Easter, she and her family always went to Mill Creek Park to the fish pond. She said they would walk around, feed the fish and snack on things they got in their Easter baskets after church.

Wittenauer said she and her family also got a hard-boiled egg and a marshmallow-wrapped egg from Gorant’s Chocolates, a local company from where she lives.

“We always had three foil eggs and a package of crackers,” Wittenauer said. “That was it.”

Wittenauer said for her family’s main meal, they always had baked ham, deviled eggs, potato salad, baked green beans and fresh Easter bread. She said she still tries to keep up with the tradition.

“If the weather cooperates, I do try to go to the fish pond with my grandchildren when I can,” Wittenauer said. “I love it because it’s like an awakening of life again and starting anew.”

Kayla Haywood, a graphic and interactive design major at YSU, said when she was little, Easter was a hectic time for her because of being the only girl out of all of her cousins in her family. She said she was always the center of attention. 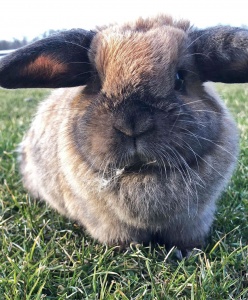 “I always had the Easter dress and everyone was all excited,” Haywood said. “My family would come over and we would just have a huge feast.”

Haywood said she and her family are Croatian, so cabbage-and-noodles is a staple for every holiday, including Easter. She said her mother also decorates using correlating plates, napkins and Easter cups.

“Two of my uncles would disappear and we’d be like, ‘what’s going on?’” Haywood said. “All of a sudden, we would look out and there’s eggs everywhere outside.”

Haywood said she and her family would have a huge Easter egg hunt and enjoyed having everyone over. She said it was like her family’s day to be able to show off their home and the food they prepared.

“We keep the same traditions for the most part,” Haywood said. “We don’t really have an egg hunt anymore; there’s no little ones in our family anymore,”

Haywood said she and her family still get together and instead of having an egg hunt, they will play cornhole or something similar.

Lydia Tarleton, also an interactive and graphic design major at YSU, said she and her family would attend a Good Friday service at church and on Easter morning, they would try to find the Easter baskets that her mother had hidden.

“We would go to my grandma’s house and have dinner,” Tarleton said. “Then we would have an Easter egg hunt, and she would fill them with quarters.”

Tarleton said she was the only one out of four kids who liked Peeps, so she got a bunch of those.