The Youngstown State University College of Graduate Studies celebrated 50 years of success by holding a banquet on Aug. 25 to bestow awards, give networking opportunities to students and alumni and show presentations from YSU figures.

The graduate program began in 1968 with 13 programs and has increased to 55 since 2014. There are currently 1,200 students enrolled this semester.

STEM has gained much recognition over the years, and Sal Sanders, dean of the college of graduate studies, said it is a high-leveled program that draws students in each year.

“[The students in the STEM program] are probably some of the best in the country at what they do, so they attract students from all over the country” Sanders said. “We have students that are working on being prepared as future professors.”

The graduate college plans to expand over the next year by adding in new programs that will help the needs within the community. Sanders said there has been a lot of growth with shifting in programs and developing new ones that are in need.

“We just got approval for a Ph.D. in health sciences,” he said. “As needs are identified out in the community and job markets with different careers, we build those high-level programs to allow students to take their education to the next level.” 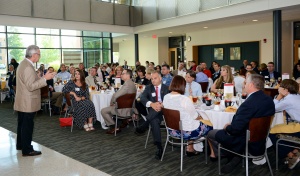 Graduate college students have several chances to gain different opportunities throughout their education such as research, performance and co-authoring papers and through projects together at national conferences.

Tori Centofanti, a second-year mechanical engineering student in the graduate studies program, said she has already had a few experiences in her field.

“I work with a professor, and I’m doing research with him,” she said. “I already had an extended abstract published and will have two papers published by the time I’m graduated.”

Centofanti said a master’s degree pushes students to expand their minds and build more knowledge in their field.

“I know for engineering, a master’s is very valuable,” Centofanti said. “It depends on how much you enjoy being a self-starter and to push yourself to grow and be motivated.”

Centofanti said having a master’s can be helpful in the long run when applying for jobs. She said sometimes it can differentiate what type of job a student may get.

“Someone with a master’s may be doing more of creative solutions thinking versus someone with an undergraduate,” she said.

At the banquet, the faculty selected several nominees for the GIANT award based on their achievements and contributions to their graduate education.

Guests participated in campus tours provided by the Penguin Shuttle and tour guides. A wine and beer social followed in the Williamson College of Business Administration.

Angie Jeffries, senior coordinator of graduate administrative affairs, said there are several events planned throughout 2018 to celebrate the anniversary.

“2018 was our 50th anniversary, so we have several things planned throughout the year including a tailgate during alumni weekend,” Jeffries said.

A group of alumni sponsored 20 tickets for students to attend the event and listen to the presentation and award ceremony.