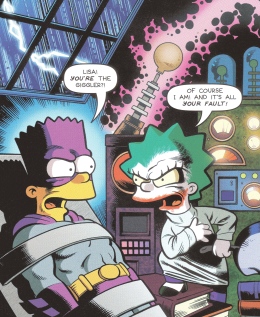 Excerpt from “One Bart and Stormy Night.” Written by Chris Yambar.

As a young boy, Chris Yambar’s father would bribe him with comic books to get his hair cut.

“My dad was my gateway drug to comic books,” Yambar said.

He wanted a way for area residents to attend a comic book convention without the hefty price tag.

“It’s unrealistic for a family to be able to go to a comic book convention and spend $35 a person just to walk in the door. On top of that, you have concessions and whatever merchandise you want. So, I thought, ‘Let’s have one on my lawn,’” Yambar said.

Saturday will be Yambar’s third Lawn-Con. In past years, more than 300 people have attended, he said.

Yambar said he doesn’t charge the vendors to sell at Lawn-Con; he just asks that they donate a portion of their proceeds to First Book Mahoning Valley and bring their own table.

First Book Mahoning Valley is a nonprofit organization; all funds go toward distributing books to children so they can have their own books at home.

Amy Neral, coordinator of First Book Mahoning Valley, said they are thrilled to be partnering with Yambar for the third year in a row.

“We are honored to distribute books at the event and increase awareness about the importance of children having their own books at home to read at will,” Neral said.

People often dress up, and there will be live music and sideshow performers.

“It’s something people feel like they can be a part of,” Yambar said.

In the past, people have come in carloads. Yambar said he likes seeing families get involved.

The family element is one aspect that Yambar likes about “The Simpsons.” He recently completed another Simpsons comic, “One Bart and Stormy Night.”

Yambar wrote the storyline for the comic, where Bart Simpson is a Batman-inspired character, Bartman.

“I love Bart, and I love the bat. I’m crazy for Batman, and in this comic, I got to play with both,” he said.

Yambar remembers the first episode of “The Simpsons” that he ever saw when the series hit television.

“I remember thinking, ‘This will be amazingly huge,’” Yambar said.

Yambar has decorated his office with comic book and cartoon memorabilia. One of the largest decorations is a life-size model of Marge and Maggie Simpson.

He said the Homer component resides at his comic book store, Liberty Comics.

“He has his arm extended like it’s around Marge, and his other hand is out with the remote, so people can come to the store and get their picture taken with Homer,” Yambar said.

He also likes how everyone can relate to “The Simpsons.”

“There is a character for everyone in Springfield,” Yambar said.

He has other comics planned for the future, but said he feels “The Simpsons” will always be a part of his life.

“I still get just as excited today as I did when I first started,” Yambar said.