Youngstown State University Dana School of Music ushered in the Christmas season by hosting its annual holiday event, Carols and Cocoa, in Stambaugh Auditorium’s ballroom Wednesday Dec 7. The event, which originally began in the lobby of Bliss Hall, has grown every year since. 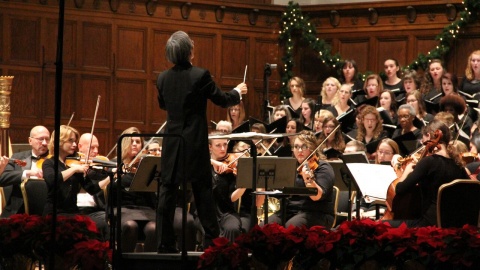 Randall Goldberg, an assistant professor of music history, said that the concert has become a holiday tradition for not only YSU, but the surrounding community as well.

“Almost 40 years ago, a new tradition began as the Dana School of Music hosted a modest sing-along in the Bliss Hall lobby,” Goldberg said. “It is now an outstanding musical evening consisting of the easygoing Carols and Cocoa segment and the more formal Holiday Concert.”

Michael Barkett, a fourth year YSU Dana student, who has performed at three previous Carols and Cocoa events, said that every year he looks forward to playing in the annual community event.

“The sing-alongs are some of my favorites we perform,” Barkett said. “Everyone in the audience joins in, and it creates this feeling of connectedness between the school and the people of the city.”

Following the ensembles, guests were invited upstairs to the concert hall, where the Dana Holiday Concert was presented featuring J.S. Bach’s “Magnificat” and many other holiday favorites.

The Dana Orchestra’s participation at the concert has become a community staple, with many people returning year after year to hear a vast variety of Christmas music.

Amber DiCaprio, a student of the Dana School of Music, said that December wouldn’t feel the same without taking part in the annual holiday event and listening to the Dana Orchestra.

“My favorite part is always hearing the Dana Orchestra play their Christmas songs because it’s always a blend between up to date songs and the old timeless classics,” DeCaprio said. “You can hear anything from the ‘Polar Express’ to ‘Messiah Halleluiah’ to Trans-Siberian Orchestra adaptations.”

To further accommodate the community, those who could not make the concert can listen to a stream online through YSU’s Rookery Radio. The rebroadcast will be featured on Sunday, Dec. 11 at 11 a.m. and 7 p.m.; on Christmas Eve at 7 p.m.; and throughout the day on Christmas Day. To hear this concert rebroadcast, patrons should go to www.rookeryradio.com and click on the link under “Listen Now.”