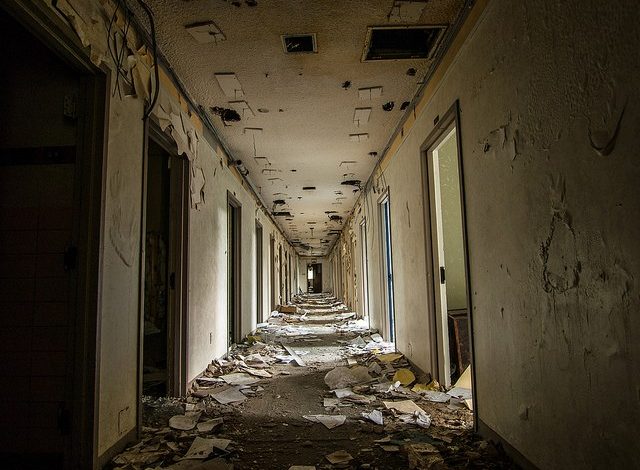 Although many wouldn’t venture inside abandoned buildings themselves, the eerie atmosphere of these locations inspires photographers to capture what is left of the past.

Sean Posey, photographer and author of “Lost Youngstown” and “Historic Theaters of Youngstown and the Mahoning Valley,” said there is an unspoken history that lies beneath this photography.

“We’re seeing the photographs, but we’re not seeing the people that were once there,” he said. “We’re just seeing this one current moment of a place in its abandoned state.”

Posey believes receiving answers relating to the legacy of these places and how they became abandoned requires a photographer with an interest in history.

One of these photographers is Johnny Joo, an internationally acclaimed artist who grew up between the rural fields of Northeast Ohio and the urban cityscape of Cleveland.

“I got into abandoned photography at the same time I started [photography] in 2006 around high school,” he said. “I was always into horror video games and horror movies, so I found some creepy abandoned buildings and started from there.”

When Joo began finding items left behind in abandoned buildings, he decided to research their history.

“At first, I just thought the places were cool, but the more I looked into it, the more I thought, ‘Why was this here?’” he said.

Joo kept this question in mind as he traveled to Youngstown, where he captured what once was the Paramount Theatre on West Federal Street and Hazel Avenue.

But one of his favorite projects was the Lincoln Behavioral Center, formerly known as Woodside Hospital, on Indianola Avenue.

“I found tons of books and documents and patient logs, and since [the behavioral center] closed in 2008, it wasn’t long before I found former patients on Facebook,” he said. “I ended up talking to this one girl who ended up getting her whole life straightened out and went to college for a medical field.”

Although the Lincoln Behavioral Center has since been torn down, its memory lives on through Joo’s blog, architecturalafterlife.com. While his photos provide a reminder of the building’s past, the historical descriptions that accompany are just as eerie.

Like Joo, Sherman Cahal, a historian and photographer based in upstate New York, found himself in Youngstown’s abandoned locations that were once thriving with life.

“I grew up in a Rust Belt. My dad worked in a steel mill and my mom worked more in the service industry,” Cahal said. “So, I could relate to Youngstown.”

Cahal photographed Youngstown Sheet and Tube, abbreviated as YS&T, company housing, where he describes its past through his blog, abandonedonline.net.

“There goes that legacy of what someone might have done with their life,” he said, referring to former employees of YS&T. “It has to be a profound sadness that something that you put your whole life toward has been completely demolished.”

Unlike Lincoln Behavioral Center and YS&T, some places in Youngstown will always remain a mystery.

“I used to go to a lot of old homes, especially on the south side [of Youngstown],” Posey said. “There would be family photographs left on the wall or diplomas. … All you can do is speculate [about what happened], and that’s the interesting part of the mystery to it.”