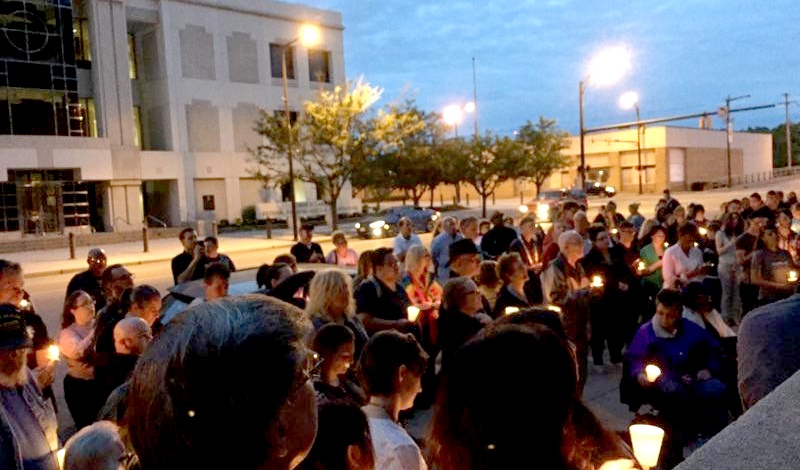 On Monday night, the steps of the Mahoning County Courthouse were filled with the light of over 100 candles in memory of the victims hurt or injured during the shooting at Pulse nightclub in Orlando, Florida.

People of all ages from the Youngstown area LGBT+ communities gathered to host the candlelight vigil, which consisted of an opening prayer, speakers, a reading of the names of the victims who died, a performance of “Somewhere Over The Rainbow” and a closing prayer.

Youngstown Mayor McNally, and Ohio Rep. Michelle Leopre-Hagan all took the stage sharing their thoughts about the tragedy.

There were also representatives from many different religions and churches and local LGBT+ activists as well as a representative from the Youngstown City School Board.

Brian Wells, a Youngstown State University professor and Safe Zone training leader, said seeing the community gather to mourn such a tragic event was touching not only to him, but to all the members of the LGBT+ community.

“There was a great mix of LGBT+ individuals and allies, and my heart was warmed seeing everyone together providing support to each other through this extremely difficult time,” Wells said.

Nicole Zayas, a YSU graduate student and active member of the LGBT+ community, said the gathering was not only to remember those whose lives were lost, but to serve as a reminder that the LGBT+ community is strong and won’t be shaken by such hateful crimes.

“Everybody was very moved. As a community coming together to mourn such a tragedy, it was a symbol of hope in our community,” Zayas said. “Regardless if its in our backyard or farther away, we must come together to show support. Something like this is so much bigger than any arguments that could exist between groups. When you look at the bigger picture, and when bigger events happen, we all have to rely on each other.”

Zayas said that Mayor John McNally made a touching speech during the event, letting everyone know that Youngstown is standing in solidarity with the LGBT+ community.

“He told us there would be a lot of police and security at the PRIDE event next month, and that he would be advocating for equality and safety of all members of the Youngstown area,” Zayas said. “That’s huge.”

“I’d just like to say that our fight is far from over,” Coven said. “It was never about a set of wedding rings, and it certainly won’t be now. It’s literally about life, liberty and justice for all.”

Wells said he thinks that the U.S. is approaching a crossroads concerning the future of LGBT+ individuals.

“I’m afraid, as some of my friends put it, that the honeymoon stage from the SCOTUS marriage equality ruling is over,” Wells said. “Are we going to embrace kindness, love, compassion and the humanity which exists within each of us? Or are we going to let our differences divide us, fill us with hatred and pit us against each other more so than we already have been?”

Things have definitely come a long way, Zayas said, but that doesn’t mean that the U.S. still doesn’t have a long way to go. She said change starts with working together to educate others on the issue and promoting love and acceptance.

“When I was younger, I remember when two men would walk down the street and hold hands, it was a huge deal,” Zayas said. “Now to see how far we’ve come — we thought we were past this, past the hate crimes. It shows us that there’s not acceptance, and we still have to work together to achieve it.”