Hundreds of people lined the pathways of the Canfield Fair on Monday to greet Donald Trump, who rolled through the fair with his motorcade around 3 p.m.

The candidate’s campaign did not officially announce the event, but rumors had spread over the weekend. Several people said they came to the fair with hopes of seeing the candidate. 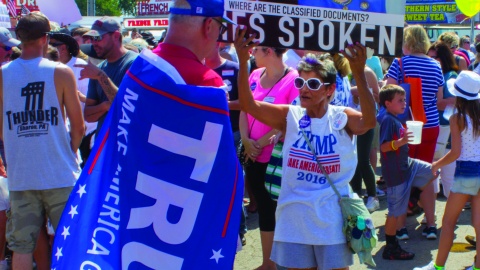 Trump came down the fairway, stepped out of his SUV and waved at people as he made his way to the Mahoning County Republican Party tent. Inside the tent, Trump shook hands and signed autographs.

Jeff Vrabel, a student at Poland Seminary High School who volunteers for the local GOP, was in the tent as Trump passed.

“[It was] absolute madness,” Vrabel said. “I was like three or four people away from him. It was really cool.”

Upon leaving the tent, Trump thanked supporters through a megaphone.

“We’re going to bring jobs back to Ohio,” Trump said. “We’re not going to make these horrible trade deals anymore.”

He also reassured supporters that he would build a wall along the Mexican border. The Republican tent at the fair had garnered international attention for selling makeshift bricks that people could sign and use to construct a wall.

After his visit with the local GOP, Trump returned to his SUV and was driven to the fair administrative office where he did an interview with David Muir for ABC’s World News Tonight.

Supporters had been led to believe the interview would take place outside in a tent near an amusement area, and a crowd had gathered to serve as the backdrop. Muir appeared in the tent, but then left as the interview was apparently moved.

Michelle Zolnier traveled to the fair from Pennsylvania. She said it was nice to see the candidate, but the visits aren’t what’s important.

“I don’t care if he comes here or not as long as he does the right thing when he’s in office,” she said.

Trump’s antiestablishment nature drew her to the candidate, she said, and she likes that he isn’t beholden to anyone.

“He’s doing something the establishment doesn’t like,” Zolnier said. “That means he’s on the right track.”

Prior to Trump’s visit, the Mahoning County Democratic Party held an event criticizing the Republican nominee.

Several Trump supporters stood in silent protest during the speeches, including Mike Young, who volunteered at the GOP tent.

“We’re not here to cause any trouble,” he said. “Just to show our support towards Trump.”

The GOP welcomes immigrants, Young said, they just ask that they come here legally. He also criticized Democratic nominee Hillary Clinton for the attack on the U.S. Embassy in Benghazi and her use of a private email server.

“They want to badmouth Trump,” he said. “[Hillary]’s got a laundry list of unethical and immoral things.”

Harold Wilson, a Democratic committee member, came out to the fair to voice his opposition to Trump.

“Please name one thing that he has done for this country,” he demanded. “There’s no answer.”

The fair received attention from both parties this year, with Vice President Joe Biden visiting on Thursday following a rally in Lordstown supporting Clinton’s campaign.

Clinton was also in Northeastern Ohio on Monday, holding a rally at Luke Easter Park in Cleveland.