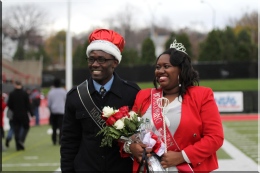 More Youngstown State University students voted this year for homecoming king and queen than last year. Those 904 students made their choice, and this year’s king and queen, Kingsley Ansah and Veronica Wesley, were crowned during Saturday’s football halftime show at Stambaugh Stadium.

As a native of Ghana, Africa, Ansah’s family and friends didn’t know about American homecoming traditions. For Ansah, this didn’t diminish the honor and surprise that come with being crowned YSU’s homecoming king.

“I was shocked,” Ansah said. “I didn’t know I was going to win. Before coming here, I had never heard of homecoming.”

Ansah said he told his family about homecoming and how he won his nomination.

“I talked to my mom, and she was very happy for me,” he said.

Wesley smiled and waved to the crowd in her crowning moment.

She said she was shocked to hear her name being announced.

“I really wasn’t expecting it,” Wesley said. “It was such an awesome feeling, and I will never forget that moment.”

Wesley said she and Ansah became fast friends after their nominations. Both said that one of the best parts of being nominated was reaching out and making connections with fellow students.

“We met a few times before homecoming court was announced, but we recently became close friends,” Wesley said. “He is honestly such a sweetheart and one of the nicest people you would ever meet.”

Both said they were happy to escort each other down the field on Saturday.

“I like the classes here, and I came to get an education,” Ansah said.

He was nominated by the African Student Union and was proud to be crowned and represent the group.

“Being king is a big honor,” he said.

After graduating in the spring, Ansah plans to attend school in New Jersey or New York to obtain his master’s degree. He also hopes to obtain his U.S. citizenship before graduation.

He said he would also like to encourage his fellow students.

“If I can be homecoming king, other students can someday, too,” Ansah said. “Being from another country, this is an honor.”

Wesley is a senior communications major at YSU. She is a disc jockey on Rookery Radio and secretary of the Zeta Phi Beta sorority, and she will receive a student diversity achievement award.

She said she will use her title as queen to continue to help students and be involved on campus.

“It’s such an honor,” Wesley said. “Winning has given me the chance to represent the YSU campus. It also gave me a huge boost of confidence and made me feel I can accomplish anything I want to in life.”