Youngstown State University offers students multiple ways to purchase food, including cash, credit/debit card or campus currency. The use of campus currency like Pete’s Points or Flex Dollars leaves students confused about how to use them.

Pete’s Points and Flex Dollars can only be used for food or food items. They are part of YSU’s meal plan, which is available for purchase at various levels. For example, the 12 BRONZE plan includes 350 Flex Dollars and 150 Pete’s Points and allows for 12 meal swipes a week at the Christman Dining Commons.

Plans are typically used by students who live on campus, but they are available to everyone. It includes a newly added meal plan, specifically for faculty and staff.

Meal swipes reset every week, but do not roll over, so any swipes left on the card for the previous week will be lost.

Flex Dollars purchase food items at all locations managed by Chartwells, YSU’s dining service. They roll over from fall to spring if the student still has a meal plan, but balances at the end of spring semester will disappear.

Pete’s Points function the same as Flex Dollars but can also be used at some off-campus locations such as the new Barnes & Noble Café, Charlie Staples Bar-B-Que and Cocca’s Pizza.

Michael Cardwell, assistant director for Retail Operations in Kilcawley Center, said Pete’s Points were designed to help supplement the meal plan, because Chartwells locations are not always open during nights, breaks or weekends.

Cardwell said the residence halls give a survey every year to ask which businesses students think should accept Pete’s Points. He said many places are willing to participate, but others such as One Hot Cookie, Taco Bell and Main Moon are not.

“We’ve asked Taco Bell multiple times, and it’s just not something they’re interested in because they get the business either way,” Cardwell said.

Other local businesses, such as Charlie Staples Bar-B-Que, were excited to participate, he said.

Places that agree to participate must rent special equipment to read a YSU student ID, so Cardwell said it isn’t free for a business to join.

Cardwell said students should know about the availability of the GET app by CBORD, which he compared to a banking app.

The GET app allows students to follow their financial accounts for any campus currency, including letting students see what they’re spending and add more Pete’s Points or Flex Dollars. Cardwell said the currency is available immediately and a feature to ask parents for funds is included.

Another addition is the inclusion of a meal plan specifically for faculty and staff. 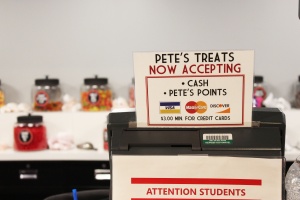 The benefit of Pete’s Points and Flex Dollars, even for commuter students, is having to carry only one card, Cardwell said.

He said with the new lounges on campus, people are spending more time at YSU, which he said is a better experience.

The Christman Dining Commons could be stereotyped as school food, but Cardwell said that’s not the case.

“I’ve gone there a lot and I think the food is quality,” Cardwell said. “They have half-off Thursdays and takeout pizza too.”

Jack Clark, a freshman astronomy and physics major, said he thinks Pete’s Points is a good part of his meal plan.

One flaw he noticed was difficulty checking his balance because it wasn’t on the YSU app.

While resident students may better understand how to use their campus currency, some commuter students who have earned Pete’s Points don’t know how to use them.

Alisha Dodge, a sophomore computer science major, said she earned 100 Pete’s Points for helping another student. She said it wasn’t explained to her where the points were accepted, but she was glad to have them.

“It was awesome. I got free food and I really needed that, because I’m a broke college kid,” Dodge said.

A new branch of Pete’s Treats will open Monday in the Kilcawley Center Annex.

For more information on what locations are available, how to get a meal plan, add to an existing plan and more, visit https://www.dineoncampus.com/ysu and Times2Dine.