Students are not the only ones affected by the construction on a heavily-traveled road at Youngstown State University. Popular locations on Lincoln Avenue spoke out about how the campus construction has impacted their business. 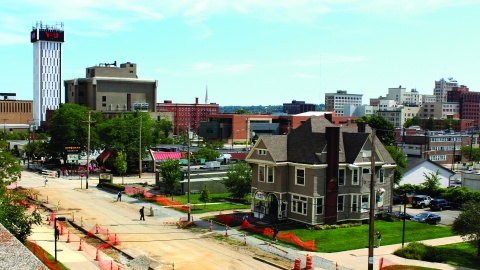 The construction on Lincoln Avenue began in July, limiting sidewalk and parking access to businesses on the street. John Kinney, manager of Hot Head Burritos, said business was slow before school began.

“There was a week where it really, seriously impacted our business,” Kinney said. “We haven’t had business that slow since we opened.”

Kinney said Hot Head Burritos made approximately $1,000 a day during that time, which is half of average sales in the summer. He said the decline in sales turned around once fall semester began.

“Once school came back in session, sales from the time before quadrupled,” Kinney said.

Sales at Hot Head Burritos were about 20 percent higher than the beginning of the semester last year, so Kinney said the construction hasn’t had a negative impact financially.

“Our sales were higher than we’ve ever had,” Kinney said. “Luckily due to location and the student body, [the construction] didn’t affect us.”

Several other businesses on Lincoln Avenue also said the construction has not put a damper on sales. Matt Melito, manager of Pressed, said they have seen an increase in sales from last semester.

“Our number of customers remains unaffected, and all of our regulars have managed to find their way to us through the construction,” Melito said. “We have continued to see new customers as well.”

Melito said Pressed may be unaffected by the construction, because customers can still access the cafe from Elm Street.

“We do our best to make it known that there is still traffic and pedestrian access to our building,” Melito said. “In addition, we offer delivery to campus and downtown for those who do not wish to deal with the construction to get to us.”

A representative from Subway said sales have been down since the beginning of the semester. He said the biggest problem they have faced since construction started is parking, which may be turning customers away.

Stephanie Means, store manager of Campus Book and Supply, said the sales and life outside of the store has not been noticeably affected by the construction.

“The students are still passing by,” Means said. “Our regular customers are still coming in.”

Jimmy John’s and Inner Circle Pizza requested not to comment.

Although business at Hot Heads Burritos seems to be undamaged, Kinney said the construction should have been timed differently.

“Just for the scope of what they’re doing here, I think they should’ve definitely started this right at the beginning of summer,” Kinney said. “Traffic volume everywhere is crazy, and to be the first week of school and still have all of this closed off is not good.”

Melito said the construction will have a positive impact on the city once completed.

“We are excited about the renovations to Lincoln Avenue and what it will do for the YSU and Youngstown community,” Melito said. “Any progress that moves Youngstown in the direction of a destination city is good for our business and the community.”