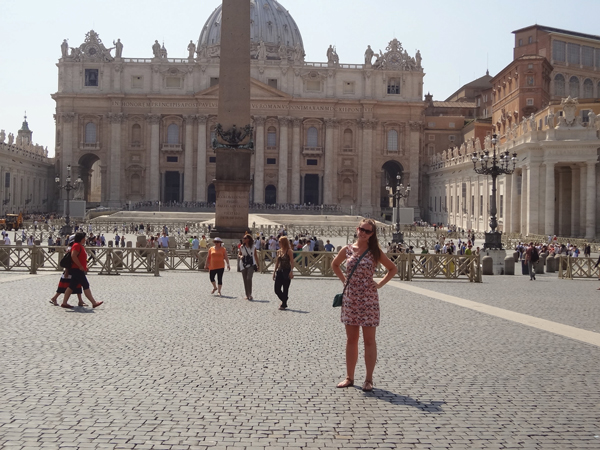 Although singing at St. Peter’s Basilica in Vatican City may seem like a dream for some, Emily Alcorn, Youngstown State University vocal music education senior, can say that dream is her reality.
Over the summer, Alcorn resided in Italy for a month and a half, partaking in two different summer workshops in which she performed in an Italian opera and sang with the Vatican Choir during a mass at St. Peter’s Basilica.
Growing up, Alcorn discovered her passion for singing in kindergarten, when she began to sing every Thursday night in her youth choir at St. Luke’s Catholic Church in Boardman.
Veronica Ceraolo, choir director at St. Luke’s, said the church is in awe whenever Alcorn lent her voice during Mass.
“Last Christmas, while she cantered, you could have heard a pin drop,” Ceraolo said. “I had tears in my eyes. I’m looking forward to seeing her do great things.”
Ceraolo also said that Alcorn would always lend a hand at the church when it came to music, sometimes offering her talents on the hand bells as well as the violin.
“She’s never said ‘no’ to me ever,” Ceraolo said. “She is a very driven young lady and there is no doubt in my mind that she will do great things.”
Alcorn began her Italian adventure on June 1 where she studied at Opera Orviteo, an international summer study program designed to give students the opportunity to appreciate the Italian culture as well as perform in an opera in the heart of Orviteo, Italy.
Alcorn said Opera Orviteo was an experience she will never forget.
“We performed Mozart’s ‘Le Nozze di Figaro’, which translates to the Marriage of Figaro,” she said. “ I played Cherubino whom is one of the leads.”
Alcorn also said the role of Cherubino was the comic relief in the opera and is also considered a pants role — a role where a woman depicts a young boy.
After her performance in “Le Nozze di Figaro” at Orviteo, Alcorn traveled to Assisi, Italy where she would take part in the Assisi Performing Arts Festival. There, she performed with the Vatican Choir during a mass at St. Peter’s Basilica.
Alcorn said that while she was competing in a Classical Singer Magazine competition this past spring, someone in her first round audition heard her sing and, shortly after, contacted Assisi to recommend her to the summer program.
“I originally had plans to study at Opera Orviteo, but when I found out about [Assisi], I couldn’t say no,” she said. “It really didn’t register until about the second week. I’ll never forget that experience.”
Alcorn said the highlight of her trip had to be singing with the Vatican Choir in St. Peter’s Basilica.
“I just couldn’t believe it was happening,” she said. “It was truly an experience that could take your breath away.”
Misook Yun, YSU vocal performance professor and mentor to Alcorn, the one to suggest the Italian programs.
“I happened to know the head of Orivteo and they were looking for someone to play Cherubino,” Yun said. “I looked at her and figured she would be perfect for the role.”
Yun also said she couldn’t be more proud of Alcorn’s accomplishments, especially since she has been studying privately with her since high school.
“If I ask her to do one thing she will go beyond what I tell her to do,” Yun said. “She does this with her music too. She always takes it to the next level.”
Alcorn said she is thankful to have Yun as a mentor.
“She really pushed me to go past anything,” she said. “I never would have thought in a million years I’d be singing at the Vatican.”