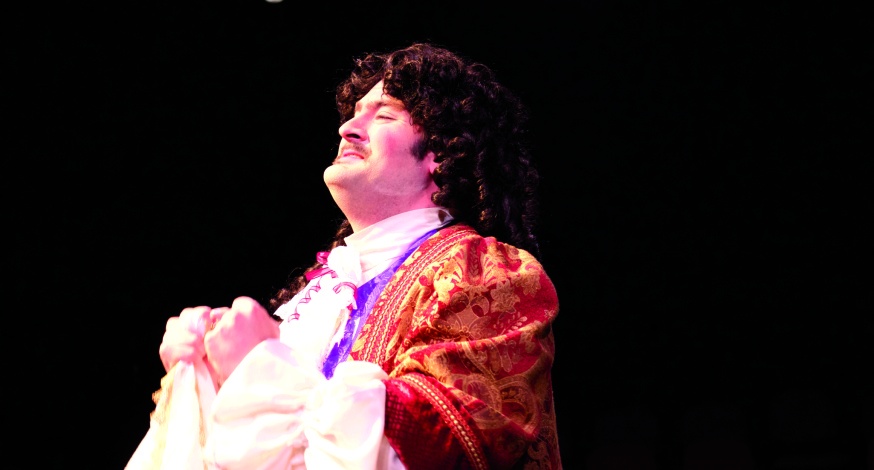 University Theater’s latest production, “Tartuffe,” exemplifies an intricacy in costume and prop design in comparison to prior theater productions.

“Tartuffe,” directed by Matthew Mazuroski, assistant professor of theater and dance, opens Friday at the Spotlight Arena Theater at 7:30 p.m. in Bliss Hall.

The show runs from Feb. 26 to 28 and March 4 to 6. Performances on Fridays and Saturdays begin at 7:30 p.m. and on Sundays at 2:00 p.m. Tickets are $16 for adult, $8 for students and free for YSU students with valid university identification.

“Tartuffe” is “[a] biting satire on social pretense and reality,” that follows the character Orgon and his family as they attempt to free themselves from the presence of Tartuffe, an unwanted houseguest.

Costume design staff has been building the costumes for “Tartuffe” for six weeks, starting at the beginning of January.

Cast members of “Tartuffe” performed for the first time in full costume at a technical dress rehearsal Tuesday night.

The costume design for “Tartuffe” is period, meaning that cast members are clad in powdered wigs, suit coats and dresses. Women are required to wear corsets and bum rolls, and men will be wearing shoes with 2-inch heels.

“They can take off their outfit and there’s a whole other outfit underneath,” she said.

Putting on their makeup and costumes takes around two hours. Erica Hess, a senior theater studies major, made the hair and makeup for “Tartuffe” her senior project.

Prior to rehearsal, the actors fraternized, in-character, on the Spotlight Theater stage, which is painted to resemble a marble floor bordered by a twisting red carpet.

They traipsed around stage, curtsying and bowing to one another. The women sitting with one hand at knee, and the other brandishing a foldout fan. The men practicing the motion of lifting their suit coat before sitting.

Garlick said that the roles, Tartuffe’s in particular, are active, and the actors have to make sure to stay hydrated due to costume size. The dresses created were made with approximately 15 yards of fabric.

Half of the dresses used in “Tartuffe” were built on-site, and the others were borrowed from other theaters or used in previous productions.

Michael Free is the scenic charge artist for Tartuffe, whose focus is on the painted surfaces of the production and managing the paint crew.

“A skillful team of work study students — under the direction of Todd Dicken — were able to quickly build and install the set pieces,” Free said.

Free said he examined model renderings of the set and mixed paints that were used on-set.

“I’m pretty happy with this show. I think it’s pretty. We still have some work left,” Garlick said. “I think it’s a fun show, and as a costume history nerd doing a big historical production is exciting to me.”