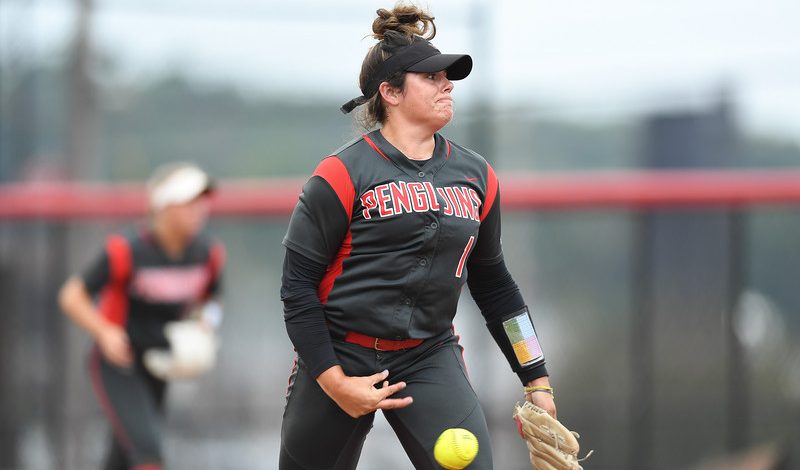 The Youngstown State University softball team has started out its season on a strong note with a 6-3 record, and junior pitcher Elle Buffenbarger has been a major contributor to the team’s success.

Buffenbarger has pitched in five games, including four starts, early on in the season. She has an earned run average of 2.62 and an overall record of 3-1.

Most recently, Buffenbarger tossed a complete game, three-hit shutout against Sacred Heart University Feb. 23. In the game prior to that, Buffenbarger threw her first career no-hitter against Norfolk State University in the team’s 8-0 victory.

This is the program’s first no-hitter in seven years. Buffenbarger’s outstanding weekend earned her Horizon League Pitcher of the Week honors for the first time in her career.

She credited her success to her teammates and their hard work.

“I got to where I am right now with an amazing defense behind me,” Buffenbarger said. “The no-hitter is just an attribute to how hard the defense and offense have been working.”

She said she is extremely proud of herself and now everyone can see the hard work she put in during the off season.

“I had a little bit of a slump last year, so being able to come out and show people how much work I put into the off-season is just exciting to me,” Buffenbarger said.

Before she was the ace on the Penguins softball team, she was in high school still trying to figure out college. She said she became more serious about college and softball during her senior year — that’s when she started to focus on her future.

While visiting colleges, she was impressed with features that YSU had compared to other schools.

“I came here, and the facilities were so nice,” Buffenbarger said. “We have the [Watson and Tressel Training Site] and other teams have to practice in the gym, so we are very lucky. Our field is nice, and I love the community atmosphere.”

One of the hardest transitions was the overall expectation going from high school to college. The junior said the toughest adjustment for her to make was the time she had to put in every day.

“You think you work really hard in high school, and you put in all the time,” she said. “Then you get to college and it’s more time, more effort and more schoolwork, too.”

Early in her freshman year, Buffenbarger found role models in some of her upperclassmen teammates. She said she wanted to be more like them on and off the field.

“My freshman year, I looked up to Lexi Roach and Stevie Taylor. They were always so level-headed and calm and worked really hard. I really wanted to be more like them,” Buffenbarger said.

Over time, Buffenbarger has stepped into a leadership role on the team. She said she still tries to model her attitude after Roach and Taylor to be the best she can be for her young teammates.

“I consider myself a positive role model, like a leader on the team. I don’t necessarily direct people around, but I always have a good attitude,” Buffenbarger said.

The softball team is looking to extend its streak of 25 wins per season to a fifth year in a row. Buffenbarger said she has confidence in this team and how close the members are on and off the diamond.

“Each year our team’s become closer. … This year we have the closest team and best team chemistry,” she said. “That’s really important on the field because you can see that we are working together and building each other up and supporting one another.”

Buffenbarger still has the better part of her junior year and her entire senior year to leave her mark on YSU.

She has plans to lead younger generations after she graduates from YSU. She is a general studies major and would like to use that to influence others by becoming a softball coach or early childhood teacher after graduation.