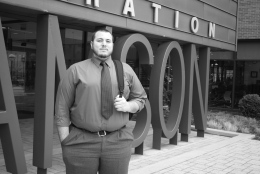 Justin Jenista will graduate with a bachelor’s degree in business administration on Dec. 16, after recovering from a broken neck. Photo by Kevin Alquist/The Jambar.

With graduation nearing, Justin Jenista would only have a summer of work, rest and relaxation before he would enter the business world with a bachelor’s degree in business administration. But on July 6, he leapt headfirst off a dock into shallow water and broke his neck.

When he made impact with the ground, all Jenista knew was that he’d hurt himself. But when he woke up the next morning still in serious pain, he knew something was wrong.

When the doctors at the University of Pittsburgh Medical Center told him he broke the second vertebrae in his neck, he was shocked, even with how much pain he was in.

“I went from not even realizing it was anything that serious, then all the sudden I’m thinking, ‘What am I going to do about work, my internship, my classes?’” Jenista said. “I didn’t know how long it’d have me down.”

With his last semester of college only six weeks away, Jenista had a lot to think about, but never for a second did he think about giving up.

Jenista was forced to wear a halo, a circular metal apparatus that stabilized his head, for two months, leaving his activity and social life restricted.

Jenista said he received a lot of support from friends and family during the time he was on bed rest.

“I didn’t get to do too much,” Jenista said. “But people always asked and wanted to know what happened, and I can joke about it. My friends showed so much support, and that meant the world to me.”

For his summer class, a nonprofit leadership internship seminar, he said his instructor, Laura McCaskey, was very understanding about his situation.

“We were able to work some things out for him, but at that point in the semester, he had already done enough to earn his grade,” McCaskey said.

McCaskey, who knew Jenista from a previous class, said he is one of the hardest-working students she had ever come across and praised his sense of humor and ability to make a classroom break out in laughter.

“I felt a pit in my stomach when I heard about it,” McCaskey said. “Tears came to my eyes, not only from thinking about him in such pain, but also because he was going to be OK.”

On Aug. 31, Jenista got his halo off and left New Castle to return to his apartment in Youngstown and to return to classes after Labor Day weekend.

“It was so good to be back in Youngstown,” Jenista said. “I missed campus. I missed the city. I had one semester to go, and I didn’t let [the injury] hold me back. I was determined to finish strong as ever.”

Looking back on his five-year collegiate career, Jenista said it amazes him how quickly the time went by. He said his broken neck was not the only challenge he faced.

“There were a couple tough classes, but I got through them just like I got past the neck injury,” Jenista said.

Graduation is a particularly big accomplishment for Jenista, who never planned to attend college and may not have stuck with it had he not been successful from the start.

“I made the dean’s list at the end of the first semester and really learned to enjoy the learning process,” he said.

As for the future, Jenista said he is excited to enter the workforce. He’ll be returning to New Castle to look for any job available and move up from there.

He said he hopes that past work experience, such as an internship at the Youngstown Neighborhood Development Corporation and nearly three years at the Greyhound Lines bus station downtown, will help him find a job in the business world.

“Justin was particularly good because he was always willing to do whatever was asked of him,” Sokol said. “That’s so important at YNDC because we do a wide variety of things at a fast pace.”