Born and raised in Essex, England, Bonhomme developed a passion for music at a young age.

“I have a memory of being around eight or nine years old and watching a TV show, seeing these guys with long hair and electric guitars,” Bonhomme said. “I was thinking that looks cool, I want to do that.”

At age 16, he said he and his friends left school to play music, eventually forming a band called Roman Holliday. In the band, Bonhomme was the guitarist and one of the two main songwriters.

“I would describe our music as sort of pop swing, or pop rockabilly. It was very much pop music, geared toward a teenage audience, but it had a certain kind of ’50s swing flavor,” he said. “We had a small brass section, and most of our songs had a swing beat.”

He said the group added a letter l to holiday, to differentiate from Roman Holiday, the 1953 Gregory Peck and Audrey Hepburn film.

Bonhomme said the band oftentimes traveled and slept in their van, sometimes being able to sleep in cheap motels.

Despite hardships traveling, he said it established “camaraderie,” and recalled the success of Roman Holliday. The band performed several shows throughout Europe, the United States and Japan, and featured on an episode of MTV during the ’80s. 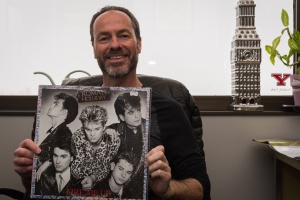 “We were on TV quite a bit,” Bonhomme said. “We toured in Europe with Culture Club, with Boy George as their singer. We toured in the US and opened for a band called the Stray Cats, who had a lot of hits back in the ’80s.”

After the second album released to mediocre results, the band grew apart, according to Bonhomme.

“I think we all started to disagree about which musical direction we should take. It went from being a tight-knit group of people, to being two or three factions within the band who had different ideas of the band’s future,” he said. “It just kind of ran its course.”

Bonhomme said the band split in ’86.

“It was both wonderful and terrible, really. The wonderful was the friendships and the dynamic of being in a band, making all sorts of music,” he said. “But once we got a record contract, I learned quickly there’s an unpleasant side to the music industry.”

“Another big reason for the breakup was it wasn’t fun anymore,” he said. “It became more like a chore and a business.”

When the band dissolved, Bonhomme said he continued with other projects involving different bands, but nothing stuck.

He said he then grew tired of the “starving artist lifestyle” and moved to New York City to pursue academics.

“I never thought about doing it again for a living,” Bonhomme said. “I had a lot of fun with it when I was younger, but those days were gone.”

In 2001, Bonhomme returned to London’s West End for a Roman Holliday reunion.

“For me, it was just a great, fun thing. We booked a place in London, one that held about 500 people and more or less sold it out,” Bonhomme said. “All the people who came were those who had seen us perform 15, 20 years ago.”

Before the reunion; however, when Bonhomme moved from England to New York City, he found himself unemployed.

“When I first moved to the states, in New York City, I needed work, and somebody I knew said there’s some jobs in this particular company that installs computer equipment,” Bonhomme said.

Little did he know, however, his future wife, Lena, worked there as the secretary.

“I went to interview for the position, and when I walked in, my wife, as she is now, was the secretary at the front desk, and as I was waiting for the interview, she and I were talking a bit, but I noticed she had a bit of an accent,” Bonhomme said. “I remember saying to her ‘What part of France are you from?’”

Bonhomme recalled a level of embarrassment. Lena hailed from the former Soviet Union, not France.

“She said to me, ‘I am Russian,’” Bonhomme said. “It was very embarrassing, but I got the job, and when I came back in, I said something about Russia, and I bought a Russian phrasebook, so I started trying to learn a few Russian phrases, and over time, developed an interest.”

Bonhomme said his decision to focus on Russian history in college was influenced by his wife. He would later obtain his undergrad and doctorate at City College of New York.

“I thought he was very attractive. He had a wonderful British accent, and he stood in front of me in his gorgeous leather jacket,” Lena Bonhomme said. “I didn’t know or interact with many British people then, but it was very positive.”

In 2004, Bonhomme accepted a job in YSU’s history department, in a city unfamiliar to him.

“I barely heard of Youngstown when I came here,” Bonhomme said. “The only thing I ever heard about Youngstown was the Bruce Springsteen song. Other than that, this place was a complete mystery to me.”

Bonhomme serves as the history department chair, but said he hasn’t lost his passion for music. Today, he said he still performs as a solo act at local venues.