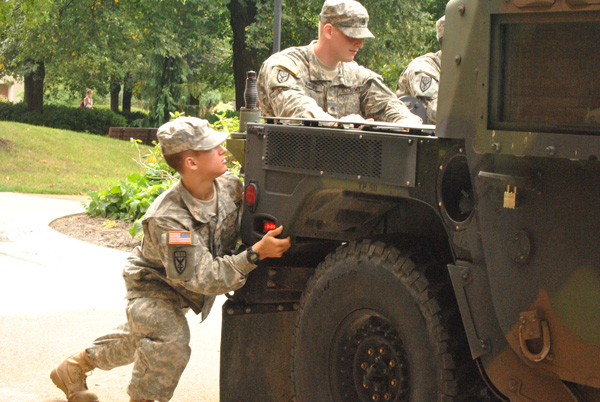 Tuesday, Youngstown State University’s chapter of Sigma Alpha Epsilon fraternity tested their strength and agility against a few of Youngstown’s finest, all for a good cause.

For three semesters, SAE has hosted their philanthropy event, “Y-town Beatdown” outside of Kilcawley Center.

Jeremy Boozer, president of SAE, said that “Y-town Beatdown” started out as an idea that could one day blow up.

“First semester, we had a brother that was in the ROTC,” Boozer said. “He had a connection to the army and when he approached them with the [idea], they loved it.”

The “beatdown” pits the brothers against the ROTC and Youngstown State University Police in various competitions such as a Humvee push, obstacle courses, tug-o-wars, and eating contests all while raising money for the fraternity’s main philanthropy, Children’s Miracle Network.

In the past, SAE has worked closely with Akron Children’s Miracle Network in Boardman and has volunteered at radiothons to raise money to give sick children with cancer teddy bears as well as attending Christmas Tree Lightings for the hospital.

This year, the brothers decided to expand out and open up the event to more organizations, one of which included the Youngstown State Police Department.

“I really liked it and had a lot of fun,” Mehley said. “I really hope next time around we can get more teams to participate because it is for a good cause.”

Between each of the nine events, the brothers and officers took colored buckets and walked around YSU’s campus asking for donations to go toward the charity of their choice.

“The most important part is raising money,” Boozer said. “You see people running across campus to get people to donate, which is cool.”

Although the weather didn’t cooperate, the brothers still managed to draw large crowds during their events and raised money to send to Akron Children’s Miracle Network.

Joe Crum, junior brother and philanthropy chair of SAE, said that the event was a really fun way to get others involved, besides those who participated in the competitions.

“Sometimes people may have a bad mentality of fraternities,” Crum said. “This is a great way to get out there and show them the great things that they actually do.”