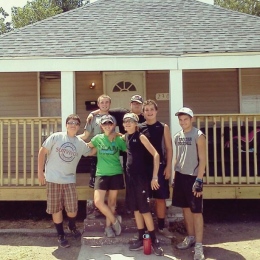 Alyssa Uhl and her group stand by a renovated home in Joplin, Mo. Photo courtesy of Alyssa Uhl.

Alyssa Uhl’s entire body ached from hours of building houses in Joplin, Mo. But when she saw hope in the eyes of an old couple she’d met, it was all worth it.

Uhl was one of three Youngstown State University students who took part this summer in TEAMeffort, a youth missions-based organization that brings together students from across the nation to help victims of natural disasters.

TEAMeffort is based in Gainsville, Ga., but has 22 camps throughout the U.S., the Bahamas and Puerto Rico.

“One thing that the news doesn’t highlight anymore is that there’s still a lot of devastation over there,” Uhl said.

Uhl was assigned to work in Joplin, which was struck by an EF5 tornado — or a tornado with winds above 200 mph — last year.

“That completely devastated that community, so our camp focuses on rebuilding homes and reaching out to the community,” Uhl said.

The Joplin team did construction work “to the max,” including drywalling, roofing, deck building and completely rebuilding houses.

“There was a garage that was basically about to crumble because the tornado ripped up the structure, and it was caving in,” Uhl said. “We had to go in and use jacks to jack up this roof and put in supporting beams up in this roof to reaffirm the foundation.”

Uhl said she was most affected by the story of an elderly couple. When the tornado hit their home, they went into a small closet area. Once the tornado passed over, they saw that their house was destroyed — except for the closet area.

“It was the hand of God protecting them through that,” Uhl said. Uhl said the trip gave her a new appreciation for YSU and the education she’s receiving.

“I met people my age who lost their jobs, and they don’t have money to go back to school,” Uhl said. “There are still kids out of school over there because the tornado destroyed their school.”

Uhl, Weiss and Gindlesberger were three of 140 young adults in their camp.

Uhl worked on five houses over a 10-week period during summer break.

She was inspired to do so because of the teachings of Jesus Christ, especially his commandment to help the needy.

“As Christians, we’re called to love and to serve others, and I thought, ‘What better way?’” Uhl said.

She was inspired by hope in the eyes of victims, despite the devastation that surrounded them.

While Uhl was in Missouri, her comrade Weiss was in Gatlinburg, Tenn.

This was Weiss’ second summer as a TEAMeffort staffer. He worked on 10 sites, while his camp worked on a total of 35.

Weiss was also a camp member during his junior year of high school.

“It really just fell into my interests,” Weiss said, adding that he has a background in construction and loves Jesus Christ.

“It’s really crazy. Sometimes you’ll see a big old mansion, and a mile down, you’ll see a shack,” Weiss said. “Those are the houses we try to work on and try to better.”

A staff member’s typical day starts at 5:45 a.m. and doesn’t end until 11 p.m. Staffers spend a majority of the day at work sites, and they also have chapel at the end of the day. They have Saturdays off.

Weiss hopes his schedule will allow him to spend another summer with TEAMeffort.

“If it works out to where I don’t have to do any internships, I will definitely be back next summer,” Weiss said.

Spreading the Gospel of Christ is what motivates Weiss to continue working.

“You have to be a spiritual guidance,” Weiss said. “People see that you’re coming just to help them. They do see that God still works in his own time.

They see that we’re coming to help them, and they may lose their faith, but they remain hopeful.”

This was also Gindlesberger’s second summer with TEAMeffort.

He wanted to get involved after hearing stories from other TEAMeffort staff members. There were many challenges and a lot of prayer, he said.

Gindlesberger was co-director at the camp in Conway, S.C., an area close to Myrtle Beach. He worked on three different job sites, one of which his camp spent six weeks on.

“Everybody goes to Myrtle Beach for vacation, but there is a lot of need in that area,” Gindlesberger said.

His camp built a new dining hall for the Waccamaw Youth Center. “It started off as a concrete slab, and it was our job to put in walls and a roof,” Gindlesberger said.

The Waccamaw Youth Center is a boys’ home for children who have been abused, abandoned or neglected.

“It’s a very good environment, and we saw the opportunity to help,” Gindlesberger said. “They are in need of more space.”

He said the home has volunteers who want to help and make dinner for the boys, but they didn’t necessarily have the room for people to volunteer.

“The mindset is that if we can help this facility, they will have more room for residence and, now, a dining hall. The facility can also be used for fundraisers for the community,” Gindlesberger said.

He also helped renovate an old movie theater and run a Vacation Bible School at a small church in the area.

As co-director of his camp, one of Gindlesberger’s responsibilities was making sure projects were completed under the budget. This was his biggest challenge.

“One of the coolest things about TEAMeffort are the variety of talents and abilities the staff members have,” Gindlesberger said.

Like Uhl and Weiss, Gindlesberger returned with a renewed appreciation for his opportunities at home.

“TEAMeffort gives you different eyes to see things,” Gindlesberger said. “I look around Youngstown now, and I see where there is need, and it makes me want to help.”