A discussion about race, privilege and unity took place at Suzie’s Dogs & Drafts on Monday. The event was open to the public and the panel was made up of three Youngstown State University professors.

City Club of Mahoning Valley held the event, a first of its kind. Phil Kidd, co-founder of the club, said they have held similar events before, but none in this type of atmosphere. 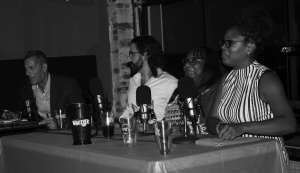 “We have had events before but they were larger and held at Stambaugh Auditorium,” Kidd said.

Every month, City Club will hold a discussion on various topics. Kidd said these discussions are being called “Brews and Views.” The topic of this past discussion was “White Nationalism, Xenophobia, & The Politics of Division.”

“Because most of the panelists were from the college of Liberal Arts and Social Sciences, it’s important for us to take a stand in social justice,” Anderson said.

Anderson said she feels the racial divide in the area is bigger than some people may be willing to admit.

“I think that people are very aware that there aren’t a lot of black kids in Boardman schools, and they’re very aware that there are a lot of black kids in Youngstown schools, but they’re unwilling to have that conversation of why that is and why black people are pushed into the city and isolated there, where as white people live in the suburbs,” Anderson said.

During the panel discussion, one of the topics touched on was white privilege. Sisco told the crowd that it is important to understand that white privilege does not accuse anyone of anything.

Many people who benefit from white privilege are unaware of it, Anderson said.

The discussion was moderated by Tim Francisco, professor of English at YSU and director of the Center for Working Class Studies. One of the questions he asked the panel was to describe the role of the media in racism.

“We have been taught that black people are scary,” Anderson said. “The media continued that representation.”

Sisco also commented on the media attention of police brutality toward African-Americans.

“It’s so deep in American culture that a police officer can see a 12-year-old black child and think he is stronger and has to be put down with more force,” she said.

When asked about the Black Lives Matter movement, Sisco said it is important for people to hear the voice of the black community and to also stop expecting black people to solve racism.

“The governor of Maryland said ‘All lives matter.’ You’re not listening to us. Yes, we know all lives matter, but for 240 years we have not seen anything where black lives matter, and that’s what we’re trying to tell you,” she said.

At the end of the discussion, audience members were welcomed to ask questions to the panel. Questions about Alt-Right students, immigration status and education amongst minorities were asked.

Labendz said it is important that this event was put on by the local community. He said the most important thing to take away from the event is that it was only one hour and the community needs many more of these discussions, and they need to be followed up with action.