Air quality, a sometimes invisible influence on everyday society, can create healthy outdoor conditions as easily as it can take them away.

The end of summertime could result in air that is less-than-satisfactory.

“July and August are the months we have not only our hottest weather, but our most stagnant weather,” Wilhelm said.

If the temperature is stagnant, meaning there’s no change in air mass for a few days, pollutants in the air increase.

Though even in midst of the poorest air quality of the year, Wilhelm said there’s rarely health risks for people who typically do not suffer any types of breathing issues in the Mahoning Valley.

Youngstown’s geographical location could be a factor in air quality that poses a threat. 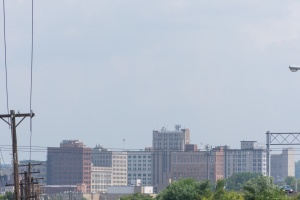 “Our city can sometimes make for poor air quality because we’re between fairly industrial cities — Cleveland and Pittsburgh,” Wilhelm said.

He said weather patterns often show that quality can drastically improve in a day.

The cautionary statement on Mahoning Valley Air’s website states when the air is deemed unhealthy, active children, adults and people with respiratory disease, such as asthma, should avoid prolonged outdoor exposure.

One way to prevent air pollution is to carpool.

Justin Mondok, environmental planner for Eastgate Regional Council of Governments and Mahoning Valley Air, has focused on trying to shift the culture of how people in the Mahoning Valley commute.

While Mondok’s goal is commendable, he said it’s difficult to get people in the Valley to drive less and carpool, ride a bike or use public transportation.

“There’s not a real traffic congestion issue in the area,” Mondok said. “In bigger cities where traffic is a contentious problem, it’s easier to get someone to think of another way to go.”

“Sometimes the effects of poor air quality are immediate such as itchy eyes or burning nose or throat,” He said. “But sometimes damage may not be known until later.”

Tamara Kerr-Sahli, geological and environmental sciences instructor, teaches a class on air quality at Youngstown State University that focuses on air pollution and how it affects human health and the environment.

As for location, Kerr-Sahli said pollutants from neighboring states can have an effect on our air quality.

“Several years ago, fires in West Virginia were causing issues in the Mahoning Valley,” she said. “You could smell the smoke and I experienced eye irritation when I went outside.”

The number to determine air quality ranges from zero to 500 and is called the air quality index (AQI). Zero on the scale represents the gold standard. Anything over 100 is considered unhealthy.

“AQI tells you how clean or unhealthy your air is and what associated health effects might be of concern,” Kerr-Sahli said. “The AQI focuses on health affects you may experience within a few hours or days after breathing unhealthy air.”

If precautions are not taken during an extended period of unhealthy air, hospitalization or death could occur.

According to Mahoning Valley Air, the last time an unhealthy air day was recorded in the region was August, 2012 in Trumbull County.

Daily updates of local air quality can be found at http://mahoningvalleyair.org/.