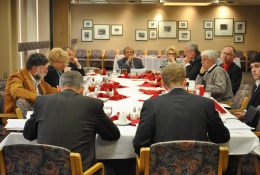 Gene Grilli and Neal McNally, front, explain the university’s budget to the board of trustees and President Cynthia Anderson during Friday’s retreat. The two technocrats proposed a tentative plan to overcome the looming budget deficit, with the hopes of balancing this year’s budget. Photo by Jordan D. Uhl/The Jambar.

Youngstown State University’s future solvency may come at the cost of students, should the board of trustees accept a revised budget proposal reviewed on Friday.

The board and members of the Cabinet held a retreat in the Presidential Suite of Kilcawley Center to analyze and discuss the current budget, which is facing a $7 million operating deficit.

However, it’s the tentative budgets for the next two years that will likely upset students. Each calls for 3.5 percent increases in tuition.

If the forecasts remain the same and the board approves the tentative measures, tuition for the next two years will increase from $7,451 this year to $7,712 and $7,973, respectively.

“It’s a tough time for everybody,” said Sudershan Garg, chairman of the board. “To maintain the program, we need additional revenue.”

Garg added that, with the continuous decrease in state funding, increases in enrollment and tuition are the primary sources of revenue. Tuition, fees and charges make up 72.3 percent, or $114.8 million, of YSU’s revenue. For fiscal year 2012, state funding is around 25 percent, forcing students to pay the remaining 75 percent.

“If we don’t do it, we’ll have to pay the consequences at a future date,” Garg said.

Neal McNally, YSU’s budget director, and Gene Grilli, vice president for finance and administration, presented an amended budget for FY 2012, which — should their projections be correct — would help YSU overcome the deficit.

“This is not a spending problem,” McNally said. “This is a shortfall problem.”

McNally and Grilli presented the board with three options. Options one and two were on opposite ends of the spectrum, ranging from ignoring the problem to closing the deficit completely.

The third option, which was met with general acceptance, offered a middle-ground approach.

Taking the benefits and consequences of the first two plans, McNally and Grilli suggested a strategic approach, which includes increasing fees for students and drawing from reserve funds.

The plan will pull $1.36 million from YSU’s reserve funds.

Increased fees on sales and services will be added. This would affect the YSU Bookstore, parking services, housing and convenience fees on credit card usage.

Other measures have been taken to weather the financial situation.

Union-exempt employees have already agreed to voluntarily concede more than $350,000 in monetary donations and furlough days.

“Their sacrifice reflects their understanding of our financial circumstances, their willingness to help us address those circumstances and their continued commitment to YSU and our students,” YSU President Cynthia Anderson said in a statement.

In September, McNally said the Early Retirement Incentive Program would produce net savings of $1.5 million. In the meantime, YSU will benefit from $1.7 million in vacant position savings in FY 2012 and $628,200 in FY 2013. These savings are part of the FY 2012 budget and will not decrease the $7 million deficit.

“It is imperative that we maintain a tight control on spending and enhance revenue through increased enrollment and student retention in order to transition through this difficult fiscal period,” Anderson said in a statement.

Although the board hasn’t formally adopted it, Garg is confident the strategic approach will be approved at the next board meeting.

“It will be tough to get $7 million in six months,” Garg said. “Anything is possible, but you have to do drastic cuts, which will hurt a lot of programs, and we don’t want to do that.”