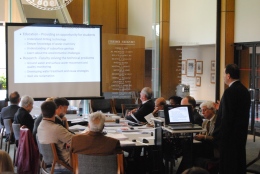 Martin Abraham, right, presents his vision for the Natural Gas and Water Resources Institute at Thursday’s board of trustees meeting. Abraham’s hope is for students to be able to begin graduating with a related minor as early as spring 2013. Photo by Chris Cotelesse/The Jambar.

Students from all areas of study may soon be able to take advantage of the emerging shale industry in Youngstown, as the proposal of a related minor was suggested to the board of trustees Thursday.

Martin Abraham, dean of the College of Science, Technology, Engineering and Mathematics, pitched the idea of a Natural Gas and Water Resources Institute to the Youngstown State University Board of Trustees.

The board forwarded the motion to be formally adopted at the meeting on Dec. 14, and an official proposal will be made for the academic senate’s consideration, with a vote expected in April.

Abraham said the institution would provide both educational and research opportunities to benefit students and faculty.

STEM officials have begun the preliminary design of the new minor.

Jeffrey Dick, chairman of the geological and environmental sciences department, said the minor would be finalized sometime this week.

The bulk of the minor will include enhanced current STEM programs. It will consist of 20 credit hours as opposed to the traditional 18, and students can complete the program in two semesters.

Additional courses will need to be developed, but Dick said it wouldn’t be a big factor.

Classes will focus on environmental studies, water chemistry and the geology of shale, Abraham said.

An external advisory board will be established next year. Abraham said he hopes research fields will be clear and underway by May 2013.

Representatives from companies such as V & M Star have already contacted him about an intern feeder system from YSU.

Dick said other environmental consulting groups and drilling companies have also shown a great deal of interest in YSU students.

“[We’re] getting them geared towards what appears to be a big boom for our local economy and eastern Ohio,” Dick said.

Though Abraham’s presentation was met with general acceptance from the board, members questioned the cost.

While program specifics have yet to be worked out, Abraham estimated $20,000 would be necessary to cover two additional faculty members, one for the geological and environmental sciences department and one for the department of mechanical engineering technology.

But the potential risks of the fracking industry have led Beiersdorfer to speak out against the drilling operation.

He hopes there are opportunities for area residents to have their water tested before the fracking commences — and again down the road to analyze the water quality.

“The big concern is if the process went [wrong], you’d have contaminants 7,000 feet under the ground,” he said.

Dick sees the potential for hazard, but he says the drilling companies do too. They recognize the pressure on them from the citizens of Ohio, environmental watch groups and Ohio’s environmental regulating bodies, which force them to be more cautious.

“They don’t want to make mistakes because that’s going to make things harder for them. It’ll cost them a lot of money,” Dick said.

The economic benefits don’t outweigh the risks for Beiersdorfer.

“What good is money if our water and soils are all contaminated?” he asked.