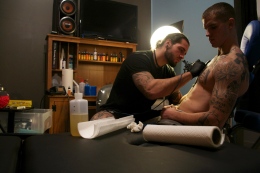 Downtown Youngstown just got some fresh ink. Located on West Federal Street, Blue Magic is the newest addition to the city’s business district.

The tattoo shop is owned and operated by Tim Adair, a former Mahoning County deputy sheriff. He said he wanted to get into the business for a while, but only recently followed through.

He took the name of his shop from the 2007 Denzel Washington film “American Gangster” about a heroin dealer who labels his product blue magic.

“In the movie, he calls his heroin blue magic, saying it’s a superior product for a better price, and that’s what we’re trying to do here. We have better art at a somewhat better price,” Adair said.

He gathered local artists with more than two decades of combined experience. Their styles range from the traditional gray and black associated with urban communities to vivid colors.

“We’ve got something for everybody,” he said. “All kinds of people come in here.”

Both young and old come into his shop. He’s seen business professionals and slackers get inked. Adair even tattooed one of his former colleagues from the sheriff’s department.

Artist Josh Fellows said tattoos have such a broad appeal because they are inherently personal.

“I think when you put something on someone’s body, and it’s there forever, it becomes sacred,” he said.

“It’s a place where you can express yourself freely. There’s no wrong way to do art,” Bill Dugan said.

Dugan said it is an intimate experience and enjoys the satisfaction of helping people express themselves.

And with the pleasure comes a measure of pain. Tattoo guns have several sharp needles injecting ink deep below the layers of skin. Sometimes the artists have to stop in the middle and give it a rest.

Dugan said men are more likely to need a break.

“Girls are tough, and they get them in tough places too,” he said.

Dugan said parts of the body like the feet and ribcage are more sensitive, and they are popular locations for women to get a tattoo.

So far, Adair and the other artists said they’ve been well received in the community, but some people still have a negative view of their genre of art.

“Sometimes we get a bad name,” Dugan said. “Don’t judge something until you understand it.”