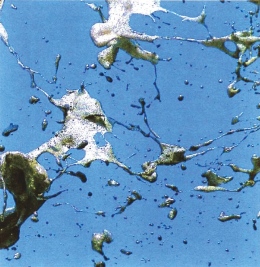 This illustration was created by Mark Hanley, who will be performing at the Ward Beecher Planetarium on Thursday. “I like the rhythm of the picture. It’s kind of free flowing,” Hanley said. “It represents the way I feel about the music.”

On Thursday, the Ward Beecher Planetarium will transform into a rock haven with cosmic crescendos.

Mark Hanley, an alumnus of the Youngstown State University Dana School of Music, will play guitar during the live show, “Sight and Sound.”

Overall, the planetarium’s calendar is a diverse one, with programming ranging from educational to musical.

For Hanley, the upcoming show has been a labor of love.

“Mark played at the Summer Festival of the Arts with another student from Sweden who played the euphonium,” said Sharon Shanks, the planetarium’s programming director.

From there, the idea to combine guitar playing with a visual effects planetarium show was born.

“Mark then graduated and focused on his solo performance, and now he’s coming back to work with us on this show,” Shanks said.

Hanley, who earned a degree in music performance, said he couldn’t imagine a better spot to play his music.

“Mark and I have worked together on the effects,” Shanks said.

Shanks noted that she and Hanley have paid close attention to the different types of effects and images that they have on hand.

“We’ll do the effects depending upon what seems to fit the mood of the music,” Shanks said. “If there’s a slow part to the song, we’ll make the lights slower. If there’s a fast section, we might have strobe lights.”

Shanks said the planetarium is no stranger to live music events.

“We have a history of live music,” Shanks said. “The Boardman High School jazz band did a show here, and we did a live play called ‘StarSeeker’ that was really great.”

The planetarium, which hosts several programs per week, offers something for everyone. In addition to attracting dozens of field trips, the planetarium also strives to showcase the blending of two worlds: science and creativity.

“We really like to open to the dome to other types of events,” Shanks said.

Besides Hanley’s show on Thursday, the planetarium will also host a showing of its latest effort, “Cosmic Castaways,” which debuted in May. The program is an original production of the Ward Beecher Planetarium, and it highlights the research of YSU astrophysicists John Feldmeier and Patrick Durrell; it will be presented at 8 p.m. Friday.

Most planetarium programs are free and open to the public. Hanley and Shanks’ collaborative concert and light show combination will make its debut at 8 p.m. Thursday.