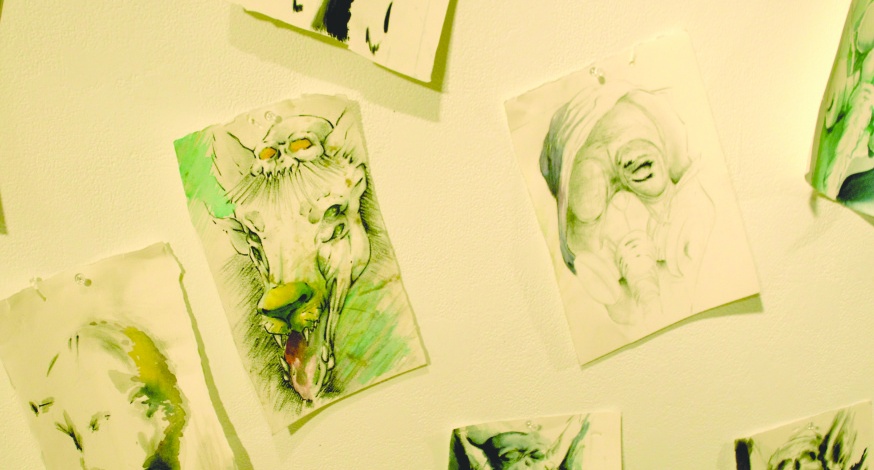 Enjoy the slideshow of the photos featured at the BFA show at McDonough Museum of Art.

As a child, I had a very creative imagination. This was heavily influenced by Sci-fi and fantasy based movies, TV shows, comics and graphic novels. I would reimagine the world around me as my own creation. I would also daydream about this world and what was going on in it. In the classroom, at recess or playing in the woods, I would bring this world to life. This was my escape from the real world to my imagined world where I would control what was going on and when it would happen. This imaginary world is still in my memories, and I can close my eyes and envision it as clear as day. Through my installation, I am able to show this world to you.

“An Exploration of Vulnerability”

Vulnerability is the state of being exposed. The nude figures within ambiguous settings, combined with the use of paper as a fragile material, reflect the ways vulnerability manifests itself. In this body of work, I explore the effects of vulnerability on the physical, emotional and mental being. The postures of the nude figures suggest a sense of defenselessness: the forms are physically uncovered, unprotected and emotionally exposed. The color palette suggests various emotional states triggered by vulnerability. The incorporation of paper further personifies this emotional exposure since the paper itself is a fragile material that can be easily manipulated or destroyed. The folded paper echoes the lines of the folded figures, mimicking those poses of defensiveness, exhaustion or isolation. The accumulation of paper in the multiple colors implies the overwhelming emotional toll of vulnerability. The varying depth and texture created by the placement of the folded paper signals the unknowingness of the future and the paths that may or may not be followed. Ultimately, the creation of this body of work was both cathartic and therapeutic — simultaneously expressing and controlling my own feelings of vulnerability.

I am a designer, photographer and filmmaker. I seek to carry out my ideas across a variety of platforms, and to do so in a meaningful, memorable way. I am intrigued by how an emerging concept ends up existing in the confines of a given space — how it is tailored to function in that specific space or how it transforms its surroundings. My work explores these notions through mood, movement, and meticulous details.

My work challenges the traditional notion of portraiture and the idea of the pose as a mere historical record. My focus is on the ability of paint combined with cropping, scale and color to distill character and convey personal meaning. My hope is that the view will draw clues from the way I’ve handled the characteristics mentioned above to untangle my personal relationship to each of the subjects while forging their own emotional connection to the work.

My preoccupation with the comic/graphic novel art form began in earnest when at the age of five and my father presented me with a hand-me-down book titled “How to Draw Comics the Marvel Way.” Those first drawings and the artists that created them were my initial inspiration and led to years of drawing, adaptation and research. The epic battles of good and evil between costumed heroes and villains, and the relatable everyman turned super-powered juggernaut, as well as historical and mythological tales influenced the direction of my narrative.