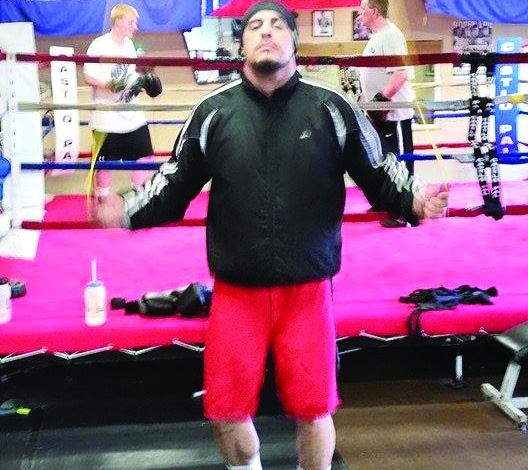 It’s an unflattering look for Keith Burnside. Then again, to flatter is the farthest thing from the point right now.

It’s about 4:45 p.m. on a late Tuesday afternoon in early December, and Burnside — who donned his work uniform less than an hour ago when he arrived at his self-named Struthers boxing gym from his day job — is wearing a body punching-bag suit.

“Wait ‘til you see what Keith and Jake are gonna do with that thing,” says Burnside Boxing president Tom Delost, peering out at the gym through his office window.

Wearing the yellow suit that is significantly and specifically padded around the midsection, the gritty 52-year-old jumps in the ring with Burnside Boxing’s top stallion — local professional fighter and Campbell native Jake Giuriceo.

Giuriceo, nicknamed “The Bull,” unleashes vicious punch after punch into Burnside’s lumpy suit. He does so in his true-to-form bullish manner, his trainer — courageously and painfully-looking enough— absorbing every blow.

Thing is, Burnside isn’t taking this beating because he has to. He isn’t making profit.

Instead, he’s heading a nonprofit organization with Burnside Boxing — the nonprofit label recently awarded by the government with the granting of a 501c3 tax exemption.

The 501c3 is a tax exemption that is awarded to nonprofit organizations if they prove worthy enough. Burnside Boxing was awarded the tax exemption based on its purpose of fostering amateur sports competition.

In taking this beating from The Bull and working countless unpaid hours with his other fighters, Burnside — with assistance from trainers Frankie Donnadio and Sammy Caldrone — does it for the love of the sport.

“You go to any other boxing gym and they might be able to show you something, but they don’t really care about you,” said Giuriceo, 26, who’s trained with Burnside since he was a teenager. “Here at Keith’s place, Keith cares about the fighters. He truly cares about taking kids off the streets. That’s the main thing.”

That same Tuesday, the Burnside Boxing gym on 581 Fifth Street in Struthers received an envelope in the mail. It came from 1001 Brinton Road in Pittsburgh and was addressed to James Kline MD.

“It’s funny, we still get his mail,” Delost said.

Kline ran a family doctor business out of what is now Burnside Boxing since 1976. He experienced trouble in the past decade, though, filing for chapter 13 bankruptcy in October 2004 and eventually selling his real estate in March 2012.

During this time, Burnside began to grow his boxing brand.

Around 2000, he started to train kids in the garage of his Manor Avenue home in Struthers. At first, it was a handful of kids — some troubled, like Giuriceo. But over the course of a few years, his numbers grew.

“We’d have 20 or 30 kids in the garage working out when I first started,” Burnside said. “A lot of these kids came from broken homes without anything. We’d train and my wife [Marianne] would feed them and talk to them.”

In 2009, Burnside moved his training into a makeshift gym on Federal Street in downtown Youngstown next to the Ironman Warehouse Gym. However, he quickly found out it wasn’t an ideal spot.

“There was no clientele in Youngstown,” Burnside said. “I was in the business district — there were no neighborhoods. I needed to be in a neighborhood where kids come by and see the gym.”

So, Burnside tried to acquire the vacant Manor Avenue Elementary School in 2010, but those plans fell through. However, he caught a break when Kline sold his office in March 2012.

Purchasing the building’s rights from The Elmton restaurant across the street, the lifetime Struthers-native opened Burnside Boxing in September 2012 after lengthy renovations.

“We ripped everything out inside,” Burnside said. “We had a lot of work to do.”

That work included knocking down unnecessary walls, making locker rooms, a weight room, an equipment room and cutting parts of the ceiling to make space for a three-foot-high boxing ring.

The location is just as Burnside prefers. The equipment is in place. In turn — now almost three years later — business is benefiting. But it isn’t getting easier.

No beating around the bush, Burnside tells it like it is.

“It’s hard to keep this place running,” he said. “We try to get help, because we need help all the time. We don’t make anything — not a dime. This 501c3, we’re just learning what we can do with it.”

The process of obtaining the 501c3 began two years ago with Burnside and Delost applying through the Cincinnati IRS. They then had to hire a lawyer, complete extensive paperwork and spend substantial money along the way.

“We had to jump through hoops, because they just don’t pass them out to anybody,” said Delost, 65-years-old and retired, who handles all of Burnside Boxing’s finances.

The 501c3 — which was finally awarded this past fall — can be used for obtaining grants as well as a tax write-off. Burnside said it should significantly help keep the gym financially stable.

In the past, they’ve incorporated fundraisers like spaghetti dinners and golf outings to raise money for bills and equipment. It’s enough to get by for months at a time, but it doesn’t leave extra money to pay employees. That’s why Burnside is constantly looking for grants, sponsorships and donations.

“Hopefully we get some grant money and I can start paying them,” said Burnside, who works as a production supervisor at the PHD Manufacturing plant in Columbiana during the day. “But so far, we’ve been pretty lucky. Almost three years for a place where nobody makes anything — that’s really good.”

A disgruntled parent shows up at Burnside Boxing — unfamiliar with Burnside, Delost or the specific work they do. They’ve brought their teenage child, but the kid — usually in need of direction, a more-healthy lifestyle or both — waits outside while the parent talks to Delost and Burnside.

“I’ll have a single mother say ‘He’s getting to that age where it’s getting tough and he’s starting to push me around a little bit,’” Delost said.

The gym president listens carefully, noting the kid’s bad habits as the parent urges for them to take the child in. “Teach them boxing?” they ask. But more importantly, teach them discipline and respect.

“We’ve had some troubled kids come in here,” said Delost, who tells each young gym member that maintaining high grades in school is the top priority. If not, they aren’t allowed to train. “But we’ve worked with them and they took out their anxieties and frustrations.”

Not to be mistaken, Burnside considers his place a boxing gym, first and foremost. He trains two professionals and a handful of talented amateurs.

However, he also knows that Burnside Boxing — consistently with 20-30 members hailing from the likes of Struthers, Campbell, Lowellville, Poland, Hubbard and Youngstown — holds a greater purpose.

“It’s not just all about boxing,” Burnside said. “See, I like to take the troubled kids off the street and get them in here and help them out.

“There’s maybe a few times that we’ve kicked someone out permanently because they just got in trouble too much and they didn’t want to go with the flow. So we keep the riff-raff out. But if a kid needs help and they come in here and show us they’re gonna improve, we’ll let them stay.”

Giuriceo knows first-hand how vital these services can be.

“You look around in this area, there’s not much for younger people to do,” he said. “So I think his aspect of trying to get them off the street and get them in here is great. … [Boxing’s] a fun sport, a good workout and I know I learned a ton of discipline through it.”

Donnadio — who’s assisted Burnside in training for the past six years — said teaching discipline is the most important aspect of their work.

“When you start doing this, the more discipline you get, the more right decisions you make in life,” he said. “Some crowds around this area, you can either end up dead or in jail. So we work with them personally to help make the right decisions.”

Antonio Mercado said he believes it’s this commitment to each member that makes Burnside Boxing special.

Mercado, 34, is Burnside’s other professional fighter. A Puerto Rico native, he bought a house in Campbell two years ago to be closer to his family — which has lived in the city for the past 20 years.

Upon his arrival, the longtime amateur searched for a boxing gym to join. He heard about the popular Southside Boxing Club run by Jack Loew in Youngstown, but chose Burnside Boxing because of its strong interpersonal reputation.

“The one-on-one time Keith and all the trainers give us is great,” Mercado said. “Keith considers us his family members and that’s what I was looking for.”

Even as he continues to chase his professional boxing goals, Mercado realizes the bigger picture.

“Our goal is to help the youth,” he said. “We want to get them better lives than sitting on their couch all day or running the streets. Me being an older guy, I want to help the younger guys go farther than I did. … It’s great in here. Everybody gets along and we help each other out as much as we can. If you can’t be a family member, you can’t be in here.”

Burnside isn’t exactly sure what the future holds for his boxing brand.

The truth is, he can’t afford to look too far ahead. Rather, he must focus on the day-to-day, month-to-month grind — especially considering the financial challenges.

But he knows a couple things for sure.

He’s excited for his top fighters — glowing about the prospects of amateurs Danny Rosenberger from Niles, Julius Thomas from Youngstown, Austin Gibson and Erika Barone from Struthers. He’s also doing his best to put Giuriceo and Mercado in good positions to make money and win fights as their pro careers wind down.

Meanwhile, Burnside is sure about something else as well.

“I really like this spot,” he said of the Fifth Street location. “Hopefully I don’t outgrow this place. It’s just the right size for us because you can keep an eye on all the kids.”

It’s just after 5 p.m. and the gym is packed — Donnadio, Caldrone and the head-man himself continuing to work with the amateurs and professionals alike. Now dripping in sweat, Burnside next laced up a pair of punching gloves and began to work with Mercado.

“We’ll see what happens down the road,” Burnside said. “But so far, everything’s been working pretty good. We got a good crew. Good people. And that’s what I’m really proud of.” 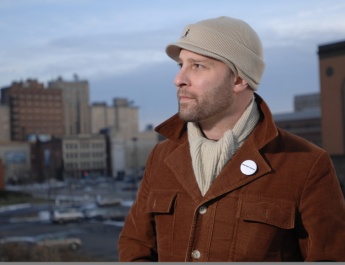 February 13, 2016 Archive Comments Off on Inspiration Born From Blight