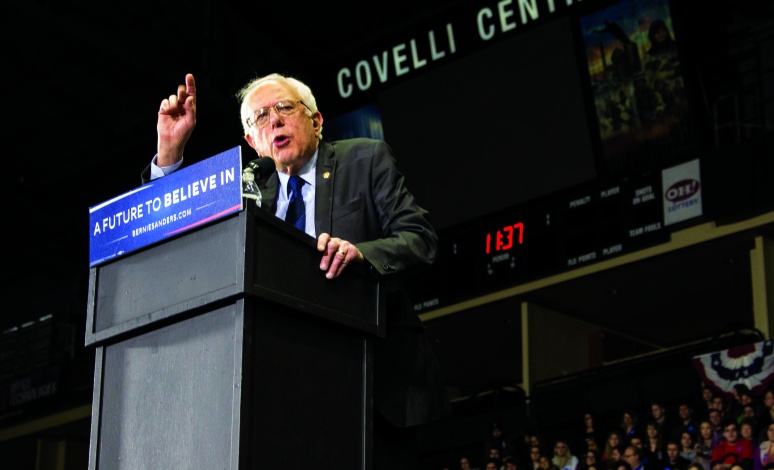 Supporters of Democratic candidate Bernie Sanders were lined up outside the Covelli Centre early Monday morning for a chance to see the senator live.

Prior to Sanders’ appearance, local retired union workers Bob Sutton and Alex Adams took the stage to praise Sanders for his opposition to international trade agreements and his pursuit of affordable health care for all Americans.

Ohio state senator Nina Turner — who famously endorsed Sanders despite working alongside Clinton early in her campaign — introduced Sanders with a high-energy speech and an “OH-IO” call and respond chat. Turner — playing further on the Ohio State University football imagery — challenging the attendees to “not let Michigan outdo us.”

Sanders’ speech to a crowd of roughly 2,000 touched on all the major issues central to the senator’s campaign; opposition to trade agreements, support for women, immigrants and LGBT liberties, taxing corporations and securing funding for universal healthcare and education. 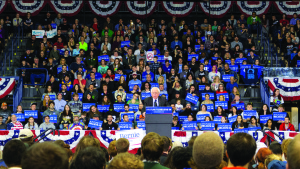 Outside of Sanders’ platform, he also enumerated the ways he and Clinton were different, focusing primarily on her support of international trade agreements and her ties to Wall Street and special interest groups. He drew attention to Clinton’s history of delivering paid speeches to major banking institutions and her unwillingness to release transcripts of those speeches.

Sanders juxtaposed himself to Clinton by highlighting his private donor fundraising efforts.

Sanders boasted his campaign raised over $5 million dollars without a SuperPac, claiming the average donation was $27.

“If I must say so myself, that’s pretty damn good,” Sanders said. 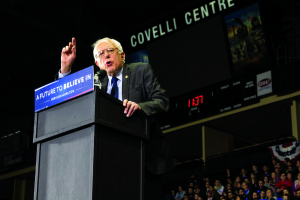 Sanders later addressed climate change — claiming it was one of the greatest global threats facing humanity — as well as the lead poisoning in Flint, Michigan and America’s failing infrastructures.

“We aren’t a poor country … why the hell can’t we fix our roads and bridges?” Sanders asked.

Sanders proposed a plan to allocate $1 trillion over five years to help repair infrastructure around the country.

Before leaving, Sanders highlighted to general election polls, which favor him to defeat Republican candidate Donald Trump by a greater degree than Clinton. He proceeded to decry Trump’s controversial rhetoric on a number of issues.

“Love always trumps hatred,” Sanders said. “We can beat Trump, and we can beat any other Republican that might run in the general election.”