With less than a week until the election, U.S. Sen. Bernie Sanders visited Youngstown State University to campaign for Hillary Clinton, the Democratic Party nominee for president. 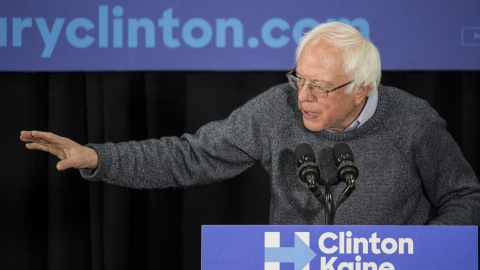 “Thank you all very much for coming out this morning. I know last night was a rough night for many of you,” Sanders said, referencing the Indians Wednesday night loss in the World Series.

Sanders said the country is better off now than it was when President Barack Obama took office and proceeded to highlight many of the policy issues on which he and Clinton agree — including overturning the Citizen’s United decision, fighting climate change and increasing the minimum wage.

“All over this country you have people that are working 40, 50 hours a week,” Sanders said.
“They are not earning enough money to feed their families.”

“There is one nation in the entire industrialized world that does not provide paid family and medical leave,” Sanders said. “You are living in that country.”

He also returned to many of the issues that drove his primary campaign, including unemployment, inequality, universal health care and a shrinking middle class. He said that many Democrats have refused to address the reality of a declining middle class under administrations from both parties over the last 40 years.

Sanders outline the history of racism and discrimination in the United States. Donald Trump would reverse progress, Sanders said, citing Trump’s past as a leader of the birther movement.

“What America has been about … [is] millions of people coming together to stand up for justice and to take on discrimination,” Sanders said. “Our diversity is our strength.”

If people care about these issues, Sanders said they need to do everything in their power to help get Hillary Clinton elected on Tuesday. But the work doesn’t stop on Tuesday, he said.

“I am also asking you to understand that politics is not just about election day,” Sanders said. “Politics is about building a movement of millions of people.”

Young people will be a major part of that movement, he said.

YSU Student Evelyn Koch introduced the Vermont senator. She said she voted for Sanders in the primary, and she has already cast her ballot for Clinton in the general election, in part because of Clinton’s embrace of affordable higher education.

“I urge you not to sit on the sidelines, or not to vote for a third party candidate,” Koch said. “This election is too important. There is too much at stake.”

Alicia Herman and Matthew Luonuansuu came out to hear Sanders speak, they both supported the senator in the primary and plan on voting for Clinton in the general election.

“I was really excited to come hear him speak,” Herman said.

“He’s very into facts, and fact-checking other people,” Luonuansuu added. “I think that’s really important in a political candidate.”

They both agreed that supporting Clinton after Sanders lost in the primary was an easy choice.

“I think [not supporting Clinton] is kind of silly because the other option is Donald Trump,” Luonuansuu said.

“I don’t understand why people can’t see how simple it is,” Herman added.

Prior to the event, some members of the Mahoning County Republican Party protested Sanders’ appearance. Don Skowron, a retired Youngstown policeman, and Ty Everhart held signs reading “Autoworkers for Trump” and “Bernie, they stole your election, so vote Trump!”

“He got cheated to death, they stole the election off him,” Skowron said.

Neither of them voted for Sanders in the primary, they both voted for Trump. Skowron said his brother crossed over to vote Trump, who has set himself apart from typical politicians.

“The Republicans are just as f—ing crooked as the Democrats,” Skowron said. “Getting someone that says he’s going to do something and does it, that’d be something different.”

Passersby disagreed with the protestor’s signs claiming Bernie had been cheated.

“And that makes you vote for Trump!?” one Sanders supporter asked.