The Youngstown State University women’s basketball team held their annual postseason awards banquet last Saturday at the Our Lady of Mount Carmel Social Hall. Among those honored at the banquet was junior guard Indiya Benjamin. However, there was some special significance to the award she received this year.

Benjamin is just the second guard in the last ten years to be named the Coach Ed DiGregorio Most Valuable Player. 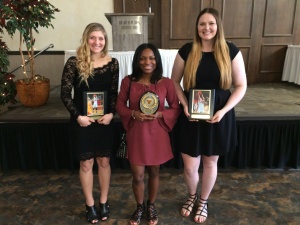 DiGregorio took over the women’s basketball program at YSU in 1983 and what was meant to be a short term appointment turned into a 20-year legacy.

DiGregorio led the Penguins during some of the team’s most successful seasons in program history, finishing the 1990-91 season with a 24-4 record. He also coached YSU in every conference in which the program has been a member: Ohio Valley, Mid-Continent and the Horizon League.

Benjamin had worthy competition for the award amongst her own teammates. Sophomore Alison Smolinski led the conference with 85 3-pointers while freshman Mary Dunn won the Horizon League Freshman of the Year.

“I was very surprised [to win the award],” Benjamin said. “Al [Smolinski] is a very good player. She was tremendous for us this year and the previous year but this year she really broke out. Mary, against all odds, came through for us big time in a lot of games. I am honored to be selected but it could have been any of us.”

Benjamin, however, had an especially impressive season. She led the Horizon League in assists while posting a career-high 11.6 points and 5.6 assists per game.

“I really wanted to get my teammates involved this year,” she said about her season. “Our confidence had been low with what happened to our team. I wanted to get everyone involved and playing together. I was passing the ball to the open person and getting their shots going. My teammates knocking down shots is what gave me all of the assists.”

Being awarded the MVP placed Benjamin in the same company as many YSU hall of fame inductees. Former women’s basketball stand-outs and current hall of famers such as Jen Perugini, Brianne Kenneally and Liz Hauger have been recipients of the DiGregorio MVP award.

“I feel honored,” Benjamin said. “It’s a big privilege to be selected like some of the other hall of famers. It was a surprise for me because we haven’t given out that award at previous banquets. I was very shocked but happy at the same time when I was selected.”

While Benjamin is pleased with her performance this season, she said that the award is giving her even more motivation for next year.

“It gives me a lot of motivation,” Benjamin said. “To see that I got this award in my junior year gives me so much more confidence to work harder, play harder and give it all I got my last year.”

Benjamin’s performance this past season not only set career marks for her as a player but also moved her up the ranks of the all-time bests at YSU statistically. She is now ranked among the top eight in program history for career assists (453) and the top-20 for career points (972).

Other award recipients at the postseason banquet were Alison Smolinski for Most Improved Player and Mary Dunn for Newcomer of the Year.