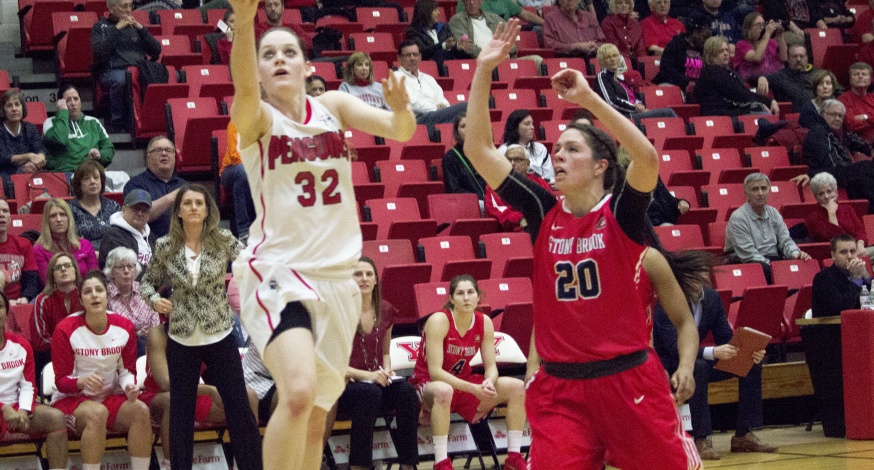 Youngstown State University point guard Indyia Benjamin scored 10 points in the final five minutes to lift the Penguins to a 67-60 victory over Stony Brook University in the first round of Women’s Basketball Invitational.

Benjamin was held scoreless for the first 35 minutes of play, but came through when it mattered most.

“I kinda felt like the first three quarters I let my team down,” Benjamin said. “So [in the] fourth quarter I said this is the last chance to give a run at it. And I didn’t want the season to end fast for Janae [Jackson] so I’m just gonna go out there and give it all I got and it started to come to me.”

Benjamin was held in check for most of the game by Stony Brooks’ point guard Kori Bayne-Walker. Bayne-Walker had 14 points through the first three quarters, but was held scoreless in the fourth.

“She is a good player. We had to buckle down because she was getting a lot of baskets. Our main focus for that was to stop her drives,” Benjamin said.

The trio of Sarah Cash, Jackson, and Kelsea Newman kept things alive for the Penguins with Benjamin struggling offensively. The trio accounted for 24 of the team’s 29 first half points.

Cash and Jackson were a force in the paint leading YSU to 36 total points in the paint. Cash finished with a game-high 17 points, and Jackson added 16 points along with nine rebounds.

“Janae had a great first half. That kind of kept us in it,” YSU head coach John Barnes said.

Newman had an efficient night shooting 5-6 from the field, including 3-4 from three, to finish with 14 points in only 20 minutes of play.

“She’s been struggling as of late, so for her to do that was big,” Barnes said.

The Penguins will play the winner of the Fairfield University vs. The University of Maryland Baltimore County on Saturday at the Beeghly Center.

“We know quite a bit about them. I’ve had two assistant watching film,” Barnes said. “Just like tonight I feel like it came down to what we do. We got back to kind of what we do in the fourth quarter.