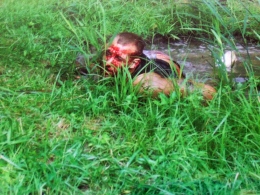 Julian Kalis crawls out of a muddy pond as he runs from a cannibal, all while acting in the independent horror film “Night of the Cannibals.” Photo courtesy of Julian Kalis.

Youngstown State University students Julian Kalis and Cory German recently decided to travel to a campground — one that, rumor has it, has been overtaken by cannibals.

They weren’t doing it for giggles; instead, they were starring in “Night of the Cannibals,” an independent horror film directed by Joe Mohn of Girard.

“Night of the Cannibals” is a film about several friends who hear rumors of cannibals who roam a campground. They decide to brush off the rumors, and end up visiting the campground to party.

But they find out that they probably should’ve remained superstitious.

Kalis and German play the roles of “Chris” and “Joe,” respectively. In the film, they’re best friends.

“[Kalis’] character is a bit of a loose cannon, whereas my character sort of brings him down to earth,” German said.

Since they’re friends in real life, they both said it was a fun experience.

“That chemistry comes across in the film,” Mohn said.

After more than a year working on the film, the cast and crew are looking forward to showing it off to family and friends on Saturday at the Halloween Horror Expo at the Eastwood Expo Center.

Filming began in August 2011 and wrapped up that November.

“It has definitely been a long time coming,” German said.Kalis said he is both excited and nervous for the premiere.

“I’ve been dying to see it,” he said. “I’m just nervous about my family seeing it because I do have a sex scene, and there is a scene where I am being tortured.”

Mohn said he was worried that the film, which was filmed with one camera and in harsh weather, wouldn’t go into production.

“People were getting really stressed and overwhelmed,” Mohn said. “One time, I almost threw the script in the fire, and I had to step back. I was like, ‘We’ve got this far. Why quit?’”

Mohn said he’s wanted to write and direct horror films since he was a child. The 25-year-old filmmaker said he likes to take a different approach to send a shiver down the spines of audience members.

In addition, Mohn said he likes to use real weapons in his movies, rather than props. This made for some close encounters — but made the actors’ jobs easier.

“There is a scene where I am being chased by a man with a chainsaw, and it’s a real chainsaw,” Kalis said. “I was running through the woods, and I was actually scared.”

In one scene, Kalis’ character trips, and the cannibal with a chainsaw stands over him and slices a tree. The scene almost caused Kalis to lose his hand, he said.

That wasn’t the only instance where he had a close encounter with a sharp object.

After washing off, he found that the machete had grazed his skin. Mohn said the cast was so willing to go the extra mile that he often had to step in.

“We use real weapons, but I still want everyone to be safe,” Mohn said. “Once everything is edited together, it looks very real.”

Mohn said he plans to make more films and possibly turn “Night of the Cannibals” into a trilogy.

“There aren’t a lot of cannibal movies out there compared to zombie or slasher films,” he said.

This project has also opened up doors for both Kalis and German. Kalis said he has plans to star in other horror films that are in pre-production.

Although German said he is taking some time off from acting to focus on school, he’s been offered roles in other independent films.

“It’s definitely something I want to get back into,” German said. “I always wanted an opportunity to get into acting, and I’m so excited to see this project finally come together.”