The next time you walk into the Beeghly Center, 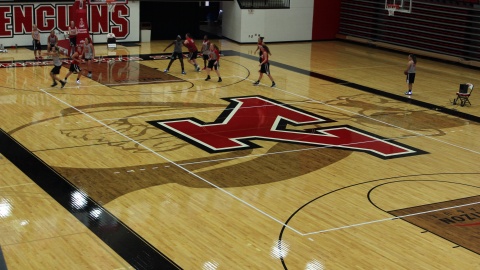 things are going to look a little different. The basketball court received a complete makeover during the summer.

“The floor itself was completely redone, I would say, eight years ago, and I think that was the first time it was redone since the original floor,” Strollo said. “Every eight years or so they want you to sand it down, put a new fresh coat of varnish on it and paint it.

“We were trying to give it a different look. We got our student-athletes involved, our marketing department and coaches. I think they did a pretty good job coming up with the new look.”

Robb Schmidt, YSU assistant athletic director, was in charge of the renovations and said he came up with approximately 35 different designs for Dom Rosselli Court. Schmidt said the list was eventually narrowed down to three choices, and the reconstruction began in May.

“This year we talked and said ‘you know, it’s been eight years since we had type of a new design on that floor, and the floor that was down in 2008, the first floor, was getting a little old,’” Schmidt said. “The lettering on the baselines looked a little cartoonish. There were some logos on the floor we wanted to clean up a little bit — give it a whole new identity really.”

Schmidt said the athletic department wanted a look that ‘wasn’t going to go out of style,’ because the court isn’t going to change for another 10 years.

“In 2009, Pete was at midcourt, and Youngstown State ran across the sidelines. If you took out Youngstown State, you still had Pete at midcourt, but it really wouldn’t have given a fresh look. I was talking to a gentleman who oversees the facilities here on the athletics side, Tim Stewart, and he said it would be neat if we could put Pete’s head on the court and stain it like a shadow.”

After going through several ideas involving the staining process, Schmidt and the department agreed to include a full-body stain of Pete the Penguin at midcourt with the ‘block Y’ in the center.

There was one other update added to Beeghly Center. At the end of August, the athletic department also began renovating the carpeting under the red-back courtside seats. Schmidt said the new carpet was installed to compliment the new hardwood.

“In all honesty, once that court went down you had to do a couple other things to freshen Beeghly up, because you didn’t want ‘hey nice court but the carpeting is all ripped up.’ So to kinda continue with the new look and freshening up Beeghly, we’ve carpeted the chair back sections.”

This was one of several renovations that took place since the summer of 2015. Last summer, Stambaugh Stadium received two new scoreboards, new lights and reinforced the stadium’s infrastructure.

Strollo and Schmidt said the athletic department doesn’t have any plans to include any additional restorations to Beeghly Center.