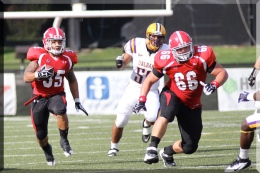 Jamaine Cook (35) runs through a hole created by Chris Elkins (66) and the rest of the YSU offensive line. Photo by Dustin Livesay/The Jambar.

Senior right tackle D.J. Main listed some of the changes he’s experienced since starting at Youngstown State University in 2008.

“The locker room wasn’t finished,” he said. “The weight room was different. Our film study room was totally different.”

And the hair is longer?

While the YSU offensive linemen play the ugliest, dirtiest and nastiest positions on the football field, they look the part as well.

Main sports long blond hair that runs partially down his back, along with a thin, scruffy beard.

“I’m going to go with myself [for best beard on the team],” Radakovich said. “But I’m sure if you ask Pratt, he’s going to have a big argument for that. … He said I’m copying his style. I said, ‘No, I’m just doing it better.’”

Whatever the case, the Penguins’ offensive line has been together long enough for a little friendly competition and joking. A starting unit consisting of four seniors — Main, Radakovich, Pratt and Lamar Mady — and a junior, Chris Elkins, has started the past 13 of 14 games together.

“They can be very special,” said head football coach Eric Wolford. “We’re not going to let up until they are a very special unit.”

Recently, the numbers the linemen have produced have been special. In the last 14 games, the offensive line has allowed only 10 sacks. They allowed their first sack of the 2012 season on Saturday against the University at Albany.

“From day one to where we are now, it’s a compliment to those guys.

They’ve worked hard. They’ve started to invest more than they ever have in their life,” Wolford said. “I think in the past, maybe they just played offensive line on Saturday and were everyday guys the rest of the week.

Now, I see a different attention to detail on their part.”

Wolford added that a big reason for their success is because they’re big.

Though the linemen don’t receive much of the glory, their improvements have been key to the Penguins’ 3-0 start.

“[The biggest improvements] have been our intensity and our depth,” Main said. “Our second string has made great improvements.”

Radakovich credits the progress to maturity.

“We’ve got a veteran group. Coach Bricillo just says something, and we automatically recognize it,” Radakovich said. “We’ve all become students of the game of football. We’ll pick up stuff that he may not see. He’ll say one word, and we’ll know what he’s talking about.”