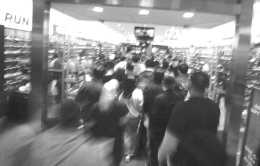 Customers stream into the Foot Locker store in South Coast Plaza in Costa Mesa, Calif., at the 8 a.m. opening for Black Friday specials and deals on Nov. 25. Black Friday has become a shopping tradition with retailers hoping for big turnout on the day after Thanksgiving. Photo courtesy of Mark Boster/Los Angeles Times/MCT.

Youngstown State University student Caty Moran once disappeared into the hordes of battling shoppers in the early hours of Black Friday.

“I used to love it,” she said, “but now after working in retail, I take care of most of my shopping online because I don’t like it anymore.”

“We have a ton of people lined up before we even open our doors,” she said. “It’s really hard to move because our store is so small.”

On Nov. 23, shoppers across the nation will trade their turkey dinners and pumpkin pies for cups of coffee and plummeting prices.

Some shopping centers, including Southern Park Mall, will open at midnight, leaving Thanksgiving Day as just a faint memory.

“People act way too crazy for a few bargains,” Anderson said. “I was able to get some really good deals on clothing items and electronics, but I found out later that if I would have just ordered the same items online, I would have gotten the same deal.”

Since the Halloween candy left the shelves, Black Friday ads have surfaced on retailer’s websites, highlighting the big-ticket items of the season. Target, Best Buy and Wal-Mart will offer deals on Apple products, flat-screen TVs, and other normally high-priced gadgets.

Department stores like Macy’s have even developed their own mobile apps to help shoppers organize their shopping strategies for the big day.

Another app available to iPhone customers, “Black Friday” by dealnews.com, allows users to browse ads from an array of stores in the palm of their hand. The techniques amongst retailers to attract customers range from technology to start times.

At the Grove City Premium Outlets, many stores such as American Eagle, Old Navy and Banana Republic will open three hours before the rest of the outlet mall, starting their sales at 9 or 10 p.m., with the rest joining them at midnight. Student Christina Cioppa has taken part in the midnight madness — and states that she hasn’t had a negative experience yet.

“I haven’t violently competed with other people for a product. My biggest enemy is the cold and waiting outside in the snow in the early morning hours,” Cioppa said.

“I’m from New Castle, so there’s a good possibility I would have to go to Boardman if there’s a product I want at Best Buy, for example,” she said.

At Ollie’s Bargain Outlet, employee Ariana Carr will be opening the doors at 6 a.m. along with her sleepy-eyed co-workers. She worked on Black Friday for the first time last year, and said she was surprised by the turnout.

“People even come to Ollie’s,” she said. “It’s a ritual for those people.” As for Carr herself, she happily admitted that she’s “never been Black Friday shopping.”