Construction of the new campus bookstore is expected to reach completion before Youngstown State University students return for the fall semester.

Barnes & Noble will be located on Fifth Avenue, neighboring the University Edge apartments. The bookstore will replace the current location in Kilcawley Center. 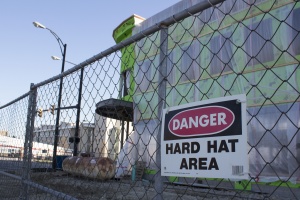 John Hyden, executive director of University Facilities and Support Services, said the new location will feature a Starbucks shop and other amenities.

The spirit store will be on the lower level, accompanied by the café with communal seating. Textbooks will be available on the upper level, and will be open seasonally like the current textbook section of the bookstore.

YSU bursar Gloria Kobus said she is excited for this addition to YSU.

“The building itself seems to bring a sophistication to campus,” Kobus said. “I’ve visited, just in my travels and personal life, some Barnes & Noble stores on campus at other universities and it’s pretty slick.”

Barnes & Noble is expected to continue price-matching at the new location, a perk that came to YSU last fall.

Kobus follows chatrooms on YSU’s app at the beginning of each semester to keep up with students. She has read positive feedback on the store’s price-matching feature, she said.

“I see chatter from the students saying, ‘Hey, don’t forget there’s price matching at Barnes & Noble,’” Kobus said. “Actually, I haven’t seen anything negative in that chatroom in regards to Barnes & Noble.”

Gabriella Gessler, president of the YSU Student Government Association, said Barnes & Noble is on board with ensuring that students can afford textbooks. She said SGA recently held a meeting with the manager of the bookstore on ways to address this issue.

“We’ve been having very healthy conversations with Barnes & Noble and they’re definitely on our team as far as textbook affordability goes, so we’re very excited with that,” Gessler said.

Barnes & Noble is working with SGA on textbook adoptions where faculty request textbooks for their classes and the bookstore makes orders to publishers. Gessler said getting the requests in on time has been historically problematic, but the issue has lessened.

“I believe we had a 40 percent adoption turn in this time last year and this year it’s gone up to 70 percent,” Gessler said. “The Barnes & Noble has done a better job of really encouraging faculty and working with Provost Abraham to make sure they can communicate with them.”

Kobus said one of the stipulations of the new location is its distance from the current one, which is based in the heart of campus. The new location will require students to cross Fifth Avenue to purchase their textbooks.

“How will students perceive having to walk to a destination rather than having that in the hub of the university?” Kobus said. “I think once they get in there and they’ve got the café, the Wi-Fi where they can sit down at the café … I think it’ll be good.”

At the same time, Kobus said having the bookstore in the area will benefit the community.

“It offers opportunities to bring the community to campus,” Kobus said. “I think the opportunity of that community-university partnership is going to be good for all of us because it will be a destination for a lot of folks.”

Pete’s Points will be accepted at the café. Kobus said attempts are being made to allow students to use them on selective merchandise in the spirit store.

“Right now if you go to the bookstore and try to use Pete’s Points, you can only do that for food,” Kobus said. “We’ve made a request for [Student Experience associate vice president Eddie] Howard that we expand on that.”

The bookstore is scheduled to be operational in early July, Hyden said.