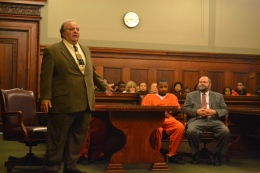 Proceedings in the Jamail Johnson murder trial have been postponed after legal counsel for accused murderer Columbus Jones Jr. requested a continuance on Monday.

The Youngstown Police Department requested an analysis of the crime scene to further evaluate the casings and shells found in the Indiana Avenue house.

The Mahoning County Prosecutor’s Office made the report available to defense counsel on Jan. 12, and DeFabio formally made his request on Thursday.

On Friday, Durkin granted DeFabio’s request for an independent laboratory to examine the evidence from the report. Another pretrial will be held Feb. 16.

“Attorney DeFabio is going to notify the court how much additional time he is going to need in order to effectively and adequately defend Columbus Jones [at that hearing],” Durkin said.

DeFabio and his client were not present in court Monday. The other four defendants in the case, along with their counsel, were present, however.

Mark Jones, Columbus Jones’ younger brother, is also charged with murder, but is indicated as a complicitor.

“Given that situation, obviously that directly impacts the defense,” Zena said.

Zena said he also needs additional time to prepare, as the report could have influence over the role of Mark Jones as a shooter.

“Based upon this evidence and your statements in court, this matter is going to be continued beyond the limited time waiver,” Durkin said.

Zena and Taylor said their clients understood the latest delay and enter into a scheduling situation with the court, which they would agree to, despite its appearance as a violation of the waiver.

Near the end of the hearing, Limbian expressed frustration with the bill of particulars for Carter, which he received just before the hearing.

“It doesn’t particularize anything; it simply restates the alleged offense,” Limbian said. “We’re still left in the dark trying to defend something that we don’t know is a problem.”

Durkin said he would accept another, more specific request from Limbian.

“I know we’re not really the main focus of this whole matter, but at some point it’s going to become necessary to understand exactly what we’re defending against,” Limbian added.

The state will continue, as planned, with trying Columbus Jones first. However, as the case proceeds, the order in which the other four cases are heard will vary given the court’s findings.

A final pretrial will be held Feb. 16 in Durkin’s court.