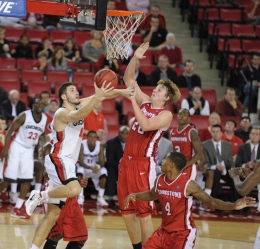 But he did point out something that, judging from recent history, the YSU basketball programs might not have realized.

After 2-0 starts for the YSU men and women — including a win from each against a Bowl Championship Series team — the Penguins are feeling the positive vibes from their success.

“I’m very happy for Youngstown, our university and our athletic department that we could be a positive light,” said men’s head basketball coach Jerry Slocum.

And that both teams are simultaneously taking a step in the right direction makes the feeling even better, Boldon said.

“Our kids know their kids. We take turns shooting on the gun. I think there’s a real sense of pride of [YSU] basketball and the direction that it’s going.”

The men’s team started in the right direction with a win against George Washington University on Saturday. The team followed that victory with an upset of the University of Georgia on Monday.

“We did a really, really good job defensively,” Slocum said. “At Georgia, it might have been the best defensive performance that one of my teams has had.”

As another positive for the YSU men, the Penguins were featured nationally on ESPNU.

“That’s tremendous for our program,” Slocum said. “There’s a lot of people that have talked about it with me that are very complimentary towards our program. And, obviously, our play spoke for itself.”

While YSU received a typical performance from Kendrick Perry against the Bulldogs (23 points), the Penguins’ newcomers proved vital in the victories.

“It just proves what we thought we could do,” Belin said of the wins. “We’re now worried about the next two games as much of the first two.”

Belin and the Penguins open their home slate on Friday against Saint Francis University at 7:05 p.m.

Two days later, on Sunday, the women will play their home opener against Bryant University at 12:05 p.m. It will be the Penguins third straight early tipoff, not that they’re complaining.

In an 11 a.m. matchup with the University of Pittsburgh on Friday, YSU upset the Panthers behind strong three-point shooting and Brandi Brown’s 16 points.

Then, on Tuesday at noon, another dominating performance by Brown and 19 points by freshman Shar’Rae Davis led the Penguins to a defeat of the University at Buffalo.

Davis said not to be surprised by the hot start.

“I know hearing that we won against Pitt might have been surprising to people,” Davis said. “But I felt that we could do it all along. We have each other’s backs on our team.”

Although Boldon stressed that the two games should not be overemphasized, there is clearly a buzz around the team that is not usually felt.

“Especially the team, we’re really excited knowing that we can win.”