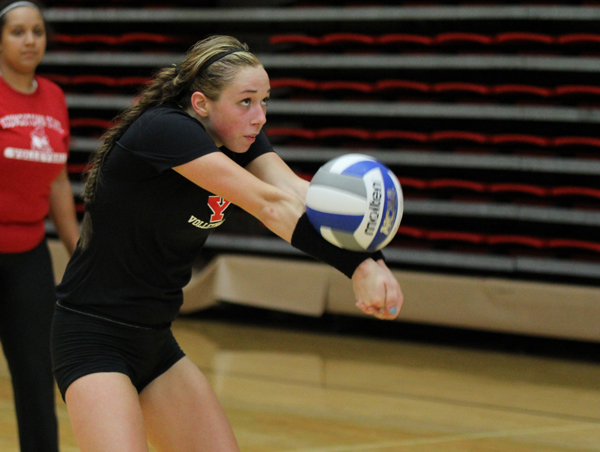 They never had a chance. Everybody was better than them. Every time they stepped on the court, they knew they would lose. This was how the Youngstown State University volleyball team felt two and three years ago.
“Coming into our freshman year and being new with a
not-so-good record, we were coming into games thinking ‘Well, we’re probably going to lose again,’” senior Missy Hundelt said.
The Penguins compiled seven wins from 2010 – 2011 in 58 games, which is a .137 winning percentage. Then the tides abruptly turned when coach Mark Hardaway took the helm last year.
“We kind of had to relearn how to win, and we just started winning,” Hundelt said. “We finally realized that we’ve been good all along and tried to put it into use.”
The Penguins finished
15-14 overall, the program’s best record in 13 years, and 5-9 in the conference. YSU also participated in the Horizon League Tournament for the first time since 2008.
YSU lost its first two games last year before winning eight straight, setting the mark for bigger things to come.
“I don’t think people believe me, but I was very fortunate what I inherited here,” Hardaway said. “I just know that when we came in and looked really hard at what we had, I know our first team meeting I told them ‘We’re going to
have a winning record, and we’re going to make the conference tournament.’
“And I don’t think they believed me from top to bottom, but enough believed me, and the rest were willing to work hard that we were able to do it.”
One thing Hardaway changed was the attitude. He, along with the coaching staff, showed the Penguins what it’s like to have fun and enjoy their surroundings.
“The first two years were rough, but ever since Mark came in it has completely changed,” senior Nichele Johnson said. “You can just tell we’re so much happier with the outcome of everything.”
When Hardaway inherited the Penguins last year, he got a young group that graduated one senior. He has seven seniors this year, which puts more pressure on the second-year coach.
“I think it’s a pivotal year just because we have seven
seniors,” Hardaway said. “When you have that many seniors, that’s always the
year when you can have
higher expectations.”
The Penguins begin the 2013 season at the Chanticleer Invitational, playing one game on Aug. 30 and two on Aug. 31. The Penguins host the
YSU Invitational beginning on Sept. 6 and will compete in two more tournaments before league
play begins.
“Our lineup hasn’t changed. We had the same girls playing since I’ve been here,” senior Erika West said. “Before we were playing not to lose instead of playing to win. Going into this preseason, you can tell the difference in the attitude in the gym. We know we have a really good chance of winning a ring. All of us, the seven seniors, we all stayed and worked so hard. Preseason showed that we’re ready. We want to go out and do something to change YSU history.”