On Saturday the B&O Station hosted the Artists of the Rust Belt for the fall market of “Arts and Ales.” The event invited members of the Youngstown community and beyond to view local artists’ work and enjoy a few craft beers while doing so. 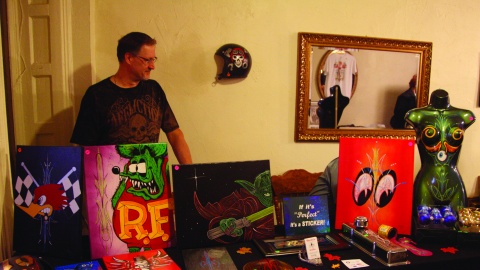 Almost 20 local artists, who are members of the non-profit organization Artists of the Rust Belt, came to show off their crafts and sell to the community. There were various styles brought to the event by the organization including paintings, photography, jewelry and much more.

Tony Nicholas, the executive director of the Artists of the Rust Belt and a vendor of photography, said that because of the high demand, it was time to bring back the fall market that had been missing for the previous two years.

“We try to promote local artists,” Nicholas said. “It’s an outlet for artists to get their work out there and be seen. Vendors can build their customer base, and it also gives the people of the public an opportunity to buy local instead of the same old generic big-box stuff.”

The group prides itself on trying to have a vast collection of different art styles to showcase what the people of this city can do. They also hope that they can continue to play a role in the revitalization of Youngstown’s art culture.

“We have a huge range of talent in the arts,” Nicholas said. “I have been to different markets like this, and we compare with anybody all over the country. This organization of arts both utilizes the talent in Youngstown and showcases the city itself.”

The organization not only tries to demonstrate the ability of the city, but they also feel that their group is supportive of each other, helping everyone to build upon their craft. Mary Ann O’Leary, a member of the group and vendor of Mee Annie’s Jewlbox, said that being a member of the group has helped her craft in many ways.

“I’ve never had any formal classes, and I dabble in all sorts of styles,” O’Leary said. “It’s always been an evolving process for me, and if I’m ever trying to figure out how to do something new, I can always ask the other artists. There’s something you can learn from just about everybody. It creates a community of artists and an opportunity to network with all types of different people.”

For Erica Speer, vendor of Dream in Color Jewelry and a Canfield native, the group has also helped her hone her craft and break into new shows.

“Being part of the Artists of the Rust Belt has helped my work, because they’re such a supportive group of people,” Speer said. “They’re a great group of people to bounce ideas off of.”

Speer also added that she tries to promote this area as much as possible even though she has branched out into different markets.

“If you’re looking for art, it’s in your neighborhood. You just have to get out and look for it,” Speer said.

The next art festival put on by the Artists of the Rust Belt will be their “Last Minute Market.” It is the biggest event of the year for the organization regarding how many artists are showcased and the overall attendance. The event will once again be hosted by the B&O Station and will fall on Dec. 18 for all of those people who are last minute Christmas shoppers.

Any artists who wish to join the group for the upcoming Christmas event can apply at Artistsoftherustbelt.org.