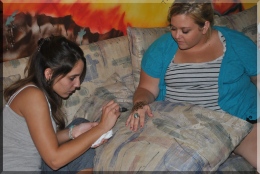 Art major Lauren Smith applies a henna design on longtime friend and frequent customer, Kodi Diglaw. Smith is applying a flower-esque design that she created herself. Photo by Kevin Alquist/ The Jambar.

Youngstown State University senior Lauren Smith began doing henna tattoos for her friends and family two years ago after a trip to Florida, where she saw it being done at a shop.

“I like original and traditional henna designs,” Smith said.

Henna is an impermanent substance that stains the skin. It derives from a shrub native to the tropical areas of Africa and other tropical climates. The plant is crushed into a powder, which is mixed with a liquid to make the dye.

Victor Wan-Tatah, director of Africana studies at YSU, said tattooing is used in many cultures, including the modern generation, to reflect messages and ideas about the environment.

“It’s a way to let people know who they are, and it’s a continuation of what human beings have done since the beginning of human beings,” Wan-Tatah said.

He said the practice of tattooing goes back to cavemen, when they would draw designs on cave walls to let others know the cave was occupied and who lived there. It’s much like how tattooing is used to show a piece of a person’s religion, or a symbol that represents the person.

“It’s a way of communicating and saying, ‘Hello; this is who I am,’” Wan-Tatah said.

This is one aspect that makes YSU senior Kodi Diglaw a frequent customer of Smith’s.

“They are a great conversation starter,” Diglaw said.

The most recent henna tattoo she received from Smith was a flower design; parts of the design represent luck.Wan-Tatah said the art and symbols will more than likely maintain their appeal.

“Human beings without sophistication or technology have been measured with creativity, which continues to appeal to today’s human,” Wan-Tatah said.

Smith said it took her about a month to learn how to do henna, and it came naturally to her as an art major.

The process of creating a henna design is much like doing permanent tattoos in that there are different gauges and bottle sizes.

Smith said you can apply the design with a bottle or a cone. The cone is like applying designs to a cake. Smith prefers the bottles.

On top of doing the designs, she also mixes her own henna. She mixes the powder with juice and sugar and refrigerates it for two days.

“It comes out almost like a muddy substance at first,” Smith said. “I found out the longer you leave it sit to dry, the longer the tattoo will last. Also, if you use lemon juice, it lasts longer as well.”

A similar muddy substance is used in many Africana cultures to convey tribe membership, religious beliefs and spirit animals.

Diglaw prefers henna tattoos because she gets the art and conversation started without the commitment.

“They aren’t permanent like real tattoos, but they still last a couple weeks, so I like that,” Diglaw said.

Diglaw said she thinks it’s great that her longtime friend is using her skills to make a business and will continue going to her for henna designs. Smith likes that she has been able to use all angles of being an art major to incorporate into her business. She uses her graphic design skills to make business cards and her drawing skills to make designs.

When she first started, she stuck to simple designs and now adds more detail.

“The biggest tattoo I’ve done was a half-sleeve for a girl going to Bonnaroo,” Smith said.

She hopes to do more parties and festivals in the future. The kits she purchases cost her $50. Depending on the size of the tattoo, she charges between $10 and $15.