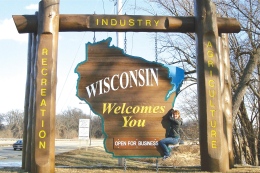 Senior Brandi Hess hangs on a sign in Wisconsin. Hess is on a mission to visit every state in the U.S. so she can create a piece of art with her photographs. Photo courtesy of Brandi Hess.

When senior Brandi Hess felt a mass on her breast in her dorm room, she said she’d be concerned only if she were awoken at 3 a.m.

“I was putting on pajamas and it kind of hurt. I was embarrassed and just figured I’d chalk it up to womanhood,” she said. “I asked God to wake me up at 3 a.m., if it’s anything to be concerned about.”

In the middle of the night, the fire alarm went off in the dormitory. When Brandi Hess returned to her room, she glanced at the clock.

The next day, she told her mother, and Brandi Hess went to a doctor’s office for ultrasounds.

“They weren’t too concerned because it is normal for women to have fibroadenomas,” the 23-year-old Mineral Ridge native said. “Then the mass went from the size of a baseball to the size of a grape fruit in a matter of, like, two weeks.”

Brandi Hess’ pain increased, and she scheduled a surgery to remove the tumor.

But, before her scheduled surgery, the tumor ruptured while she was playing football with friends in November 2007.

“When I was tackled, the mass ruptured and split into two,” she said. “It started growing and bleeding.”

Following her surgery in December 2007, Brandi Hess received an unexpected call from her surgeon on a Friday night at 9:30 p.m.

Her surgeon asked to speak with her mother, Cheryl Hess, who broke into tears and began asking the surgeon questions.

It was then, Brandi Hess said, she knew it was cancer.

Brandi Hess was diagnosed with a rare form of high-grade spindle cell sarcoma that affects the soft tissue. She said the sarcoma was working with another phyllodes tumor.

“I guess if you’re going to do it, you better go big or go home,” Brandi Hess said. “I never really felt afraid. I never really cried.”

Cheryl Hess said it was the last thing she expected to hear.

“It was tough to absorb, but we absorbed it,” Cheryl Hess said. “Brandi loves mail, and she got through it with cards and letters from friends and family. We had a closet drawer full of them.”

Cheryl Hess added that it was tough to watch her daughter fight, but said she’s a better person because of it.

Now Brandi Hess celebrates being a four-year cancer survivor, and she’s studying to get her bachelor’s degree in geography. She spends her free time and extra money traveling across the country.

She said she hopes to reach all 50 states before she turns 30.

“Whenever I cross a border, I get out and take a picture with the sign and whoever I’m with,” she said. “That way, when I have all 50, I’ll turn it into a piece of artwork or something.”

Brandi Hess has traveled to 28 states; her favorite was Montana.

The picture taking started when Brandi Hess drove west with a friend who was moving to Seattle. Her stays often vary: Sometimes she stays for a week, while other times, she’ll drive straight through.

“I wanted to make a better story for myself. We’re all going to die one day, you know. How are you going to live it?” she said. “So, to get out of the rut of day-to-day living, I decided to make my life an adventure by putting purpose behind each season of my life.”

But Brandi Hess said she doesn’t want to limit her travel to just the United States; she’s interning with missionaries this summer in El Salvador.

“We’ll be running feeding programs, working with slum kids and in hospitals,” she said. “I’ve had the call to be a foreign missionary. I want to live overseas and in the jungle.”

She said the journey has brought her a peace beyond all understanding.