Looking to stay in shape outside of the football season, Morales initially saw track and field as an opportunity to stay conditioned in the off-season.

“Originally I was a sprinter but then I saw a buddy of mine high jumping,” Morales said. “I said to myself ‘that looks fun, I could hang on the rim in eighth grade; let me give it a try.’ From there, I stuck with high jump.”

Without much coaching, Morales was raw talent trying to put everything together.

In a sport where coming out of high school coaches are looking for the athletes clearing 6’8″, Morales was still finding a rhythm clearing 6’4”.

“I didn’t have any technique or any form. I just muscled everything,” Morales said of his earlier years training pre-YSU in the WATTS facilities.

It was there where he’d eventually attain the curiosity of YSU High Jumps Coach Katrina Brumfield.

Brumfield is a former athlete turned coach out of Morrisville and Utica Colleges. 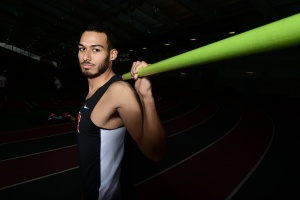 “He wanted to walk on at Akron and I wasn’t letting that happen,” Brumfield said

In her time as a coach, she was on the front lines of building up a track program before YSU.

“Every time I see him at a meet I put the buzz in his head that he needs to come to Youngstown,” Brumfield said. “He had the intangibles, he had a lot of pop but no technique so we hoped with his buy-in we could get him where he is now.”

Since coming to YSU, the two have built a kinship that has fostered a formidable coach and player bond.

“It’s been awesome to see someone that buys into the program and trusts the process. That’s all you can ask for as a coach is a kid that wants to come in and work hard. He’s not a kid that’s gonna complain; he’s gonna lead the group.”

After the initial struggles of the 6’4” high jumps and a few Horizon League High Jump Championships later, Morales now stands as a leader among his teammates clearing 7′.

After having already walked at his gradation, Morales has his eyes set on finishing out his season at YSU on a high.

“It was good to see the looks on the faces of the people that I love, the people that helped me get to where I am now,” Morale said in regards to walking for graduation.

Once the dust settles on his season, Morales will be stepping into a coaching gig of his own at Gulf Coast Prep Sports Academy in Alabama.

There he will serve as a strength and conditioning coach.

Mirroring the career trajectory of Brumfield, Morales sees the opportunity as a way to bring a culture to GCPA. The school is still in its youth with only a football program as the lone sport.

The school’s mission will be to help younger kids who may not excel at academics develop and show them they can strive for something greater than they imagined. After a year or two, the goal will be to boost the kids’ GPAs and help them attract attention from colleges.

“We wanna show people that you may not be someone now, but with time and dedication you will become someone. That will be an awesome accomplishment to see,” Morales said.

No matter where he goes in life, YSU will always follow close to the hip for Morales.

“Being a Penguin is unmatchable to me,” Morales said. “Yeah, you have Ohio State, LSU, Alabama and Oregon, which is like the dream school for every athlete. Being able to come to a small school like YSU, you see you don’t have to be a big time school to enjoy yourself. Every time you see this ‘Y’ on my chest you know who it is.”