Last season, the Youngstown State University women’s track and field team lost out on a chance at another Horizon League indoor championship after Oakland University beat the Penguins by 4 points.

But the Penguins made sure the same thing wouldn’t happen this season. 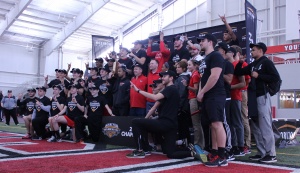 The YSU men’s and women’s track and field teams both won the conference indoor title on Sunday. The championships are the 30th and 31st titles in program history.

Both teams grabbed an early lead during the first day of the championship on Saturday. Oakland was trailing both teams entering Sunday, thanks to YSU’s Chad Zallow and some unexpected newcomers.

“A lot of guys stepped up. Going into this meet, we all talked to each other and we knew coming in that everyone was gonna have to step up,” Zallow said. “Everyone did that, everyone showed up. People that weren’t ranked when they came into the meet became ranked.”

“My brother [Carl Zallow] coming off his hamstring injury, he actually had the flu about three days ago, and he came out here and scored points for the team in the 60 which ended up being a huge push for the team to the title. A lot of guys, not just me, but a lot of the guys you don’t hear about as much, that you don’t hear about in the newspapers, they stepped up today. I’m just proud of the whole team.”

The men’s team finished with a total of 188 points, while Oakland was named the runner-up with 153. Sunday’s win marked the first time the men’s team won back-to-back indoor titles in program history.

The women’s team finished with a score of 183, beating the University of Wisconsin-Milwaukee who finished second with 140.

YSU head coach Brian Gorby said he was glad the women’s team rebounded from last year’s loss. He said last season was a result of unfortunate mishaps, but the team was “electric” on the final day.

“We’re used to this coming down to the 4×400, trying to win by a point. I’m so happy for the girls on that side, coming back from that. I’m happy for a lot of freshman. Jaliyah Elliott’s a freshman who came in second in the 60 and second in the 200. That’s unheard of.”

Gorby said athletes from both teams stepped up on Sunday. He said jumpers like Abby Jones from the women’s team and Arnaldo Morales from the men’s team helped set the tone at the start of the final day.

“Abby Jones, Arnaldo Morales and Chad Zallow, what can you say. He [Zallow] won three events against two big time guys,” Gorby said. “That’s all he talks about, how he came here to help the team. He knows he can do individual stuff, but he wanted to come here to win team championships.”

Gorby said both teams were willing to “fight and scratch” to get another shot at the conference title. He said it’s more special to share a title with the whole team than an individual award.

“To win both sides is going to be extra special because now everybody gets to celebrate for the next couple weeks and for the next 12 months.”