From age 17, Mark Lee Pringle wanted to know more about his Chinese heritage. Little did he know that his cultural journey would take him from a fifth degree black sash in tai chi and kung fu to a more moving and grooving profession.

Pringle has been teaching the art of tai chi for 42 years and said he loves every minute of it. When he is not teaching kung fu out of his Girard studio, Pringle can be found instructing students in both forms of martial arts at the Andrews Student Recreation and Wellness Center at Youngstown State University

Pringle, who has taught at YSU for the past 15 years, said the campus will be on his list of venues for his teaching as long as there is a want for this art of Chinese self-defense. He relayed advice for students who want to learn about tai chi and encouraged those who are skeptical.

“No matter what you want to do, is not only try it, but to follow through, practice and never let anyone tell you that you can’t do it! No matter what the obstacles, never give up!” Pringle said.

During his journey, Pringle had the opportunity to meet many individuals. With his years of training and determination, Pringle got the chance to meet the instructor of famous masters such as Jet Li.

One of Pringles most memorable times would be his accomplishment of ranking 10th in the U.S. for the kung fu nationals. But he didn’t stop there. He went on to be qualified for China’s world championship.

“I am definitely living my dreams,” Pringle said.

His motivation for teaching tai chi would be having his family by his side supporting him in his art, and to promote health and well-being. Pringle stated how he wants to learn the 3-D functions of his students’ bodies and that he also wants them to discover and to take special note of what they can really do.

Pringle himself has a second hobby and sense of identity that not everyone — including his students — may be fully aware of.

From the pompadour hair, striped jackets and the suede shoes, Pringle brings the Elvis look of the ‘50s to a modern era.

With shows that he performs at, there are those fans that express that he looks and sounds a lot like the former king of rock and roll. Pringle stated how he loves the fans and getting the chance to travel around and perform his favorite era of Elvis Presley.

“This is my favorite time period of Elvis’ career — I don’t really care for the later ‘white jumpsuit ‘70s’ era. Elvis was hard rocking in his prime with hits like ‘Jailhouse Rock’ and ‘Blue Suede Shoes,’” Pringle said.

With traveling around with his band, he has met Elvis’ very own drummer, D.J. Fontana, and guitar player Scotty Moore from the 1950s era.

For his Elvis days, he has been rocking and rolling for the past 12 years going from venue to venue.  He has performed at Cleveland Public Hall and every year he makes an appearance playing in Memphis, Tenn. When asked for a photo from fans, he never declines.

“It does get pretty crazy sometimes trying to handle a somewhat normal life as a kung fu instructor, and the successful traveling career as Elvis,” Pringle said. 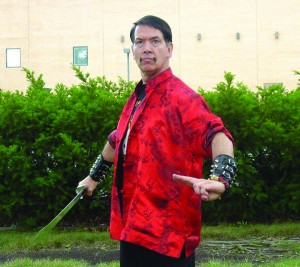 Pringle doesn’t plan on quitting either profession any time soon. He stated that his plans for the future include continuing to train and teach his arts and keep performing as the ‘50s version of the former king.

“The only thing I would change is to have it all on film, so I could watch it over again,” Pringle said. “It’s been an amazing adventure so far!”