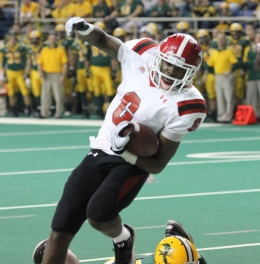 Sophomore Jelani Berassa runs after a catch during Saturday’s game against North Dakota State University. The Penguins are looking for their first playoff birth since 2006. Photo courtesy of YSU Sports Information.

“I knew that morning that we were going to win that football game,” Wolford said. “I knew through our preparations that we had a chance to win the football game.”

YSU ranks fourth in the Missouri Valley Football Conference and will welcome last-place Missouri State University (1-9, 1-6) to Stambaugh Stadium on Saturday. The Penguins must win against the Bears in order to have a shot at the playoffs.

“We are a confident bunch, and this [would be] a big win for our program,” said sophomore quarterback Kurt Hess. “A big win for us as players, but I think the hardest thing that we’re going to have to deal with this week is staying focused and preparing like it’s another weekend.”

To further YSU’s chance at a playoff bid, the Penguins need help from the University of Northern Iowa Panthers (8-2, 6-1) who will face the Illinois State University Redbirds (7-3, 5-2). If the Penguins win and the Redbirds lose, both teams would have the same record.

The tiebreaker would fall to the Penguins because they defeated the Redbirds, 34-27, on Sept. 17.

He said they’ve got to be able to focus.

The Bears own a two-game winning streak over the Penguins. Wolford said they would use that as confidence.

“I think you can see by the scores of a lot of their games [that] they’ve been very close,” he said. “I see a lot of similarities to where we were last year as far as being very close and competitive.”

Hess said the Bears run some of the same schemes as other MVFC opponents.

“They’re very talented, they’re fast just like everybody else is [and] they’re tough, but I think it’s up to us, to our front five guys, and they’ve done a great job all season communicating with me and the backs making our playmakers make plays,” he said.

Senior defensive end Daniel Stewart said he feels the Penguins can go all the way and knows that Saturday is a big game.

“We need to come out and win because it’s a playoff [game],” Stewart said.

Hess said the Penguins are a playoff-caliber team.

“We have great ability, we’re very talented and we work hard for it,” Hess said. “If we’re in or out, it’s not up to us. We need to focus on this win this week, but we believe we are.”